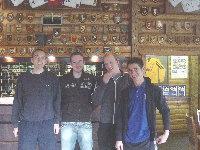 The first round of men’s senior inter counties took place at Westoe on Sunday the 20th of November. The matches were against East of Scotland and Cumbria.

The first match was against east of Scotland , first on were Chris Boyer (making his senior county debut) from Westoe and Simon Cliffe who plays at Ashbrooke! Chris took control immediately and never lost it winning 3-0 never looking in difficulty. Simon started brightly looking the better player but was soon struggling with a re-occurence of a groin injury which he hoped had healed! he fought on but just couldn’t move well enough and went down 3-0, so it was 1-1.

Next matches on were Dave Barnett(Northumberland/Westoe) and Andrew Staley(Consett), Staley had a tough task ,the match was close but his opponent was very fast and fit and ran him down in three close games! Dave was less troubled with his opponent making lots of mistakes , winning through 3-0.So the match was poised at 2-2 and was to be decided by number 2 Jon Tate from Sunderland against scotland’s Simon Boughton.

The first 2 games were shared with Simon looking mostly in control taking the first and then Jon battling back from 7-1 down in the second! when Jon took the 3rd 9-1 it looked all over as Simon was visibly tired , but he relied on his experience and battled to win the 4th 9-4 and although the 5th was close Simon always looked the likely winner edging it 9-7 and taking the match for East of Scotland 3 matches to 2, this being by far the best match of the weekend!

After East of Scotland played eachother it was Northumbria’s turn to play Cumbria, they had also lost to Scotland so it was a match to decide who would do into the promotion group next half!

We were 1 match up before we started as Cumbria’s number 5 had injured himself in his first match and couldn’t continue, this meant our number 5 Chris Nye who had been drafted for our injured player had no game, but thanks to him for turning out with very short notice!

So first matches on were Andrew Staley and Chris Boyer, Chris again eased past his opponent 3-0 with many of his family watching on (2 wins out of 2 not bad for his Debut), Staley having played well in the morning continued doing so and won through in a long 5 setter winning 9-6 in the fifth! so 3-0 and match won with 2 matches still to play!

The last 2 on were numbers 1 and 2 Barnett and Tate. Tate’s match was straight forward winning a comfortable 3-0 in little time, however the match between Barnett and Cumbria’s number 1 Gary Thwaite was closer and longer. Thwaite won the long first 9-6 with lots of long rallies , the second started the same but Barnett started to take control after Thwaite tired a touch and the points came easier, the games were then 9-3,9-3,9-5 to Barnett and match seales 5-0.

Northumbria made it through to the promotion group in March where they will play East od Scotland, Warwickshire and Staffordshire for a place in Div 1.

Thanks to Westoe especially Dave and Shirley Elsender for making all players welcome and to those who came down to support.

NORTHUMBRIA vs EAST OF SCOTLAND