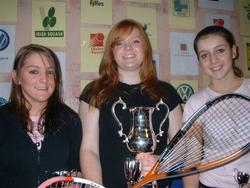 Many juniors from Northumbria have been travelling far and wide to compete in the last month, playing in the Irish, Scottish and British Opens.

The Irish open took place in early December in Dublin and four of our juniors made the trip, the players were David Elsender, Alex Storey ,Ashley and Kimberley Hay.

David competed in the BU17 ‘B’ event which was a round robin where he finished in second position of eight competitors. Mr.Storey who also was placed in the ‘B’ event of the BU15 battled through a few rounds finishing eventually in 4th place.

The Hays both played in the GU17 event , Ashley after losing her second match didn’t lose any more ending up in 17th position, Kim progressed a lot further losing in the semis to the eventual winner Bethan Williams from Wales, she also won the 3rd/4th play off to finish 3rd (photo of Kim with winner and runner-up)

Best performer over the few days was Ashley in GU17 who played at the top of her game not looking to far behind Aluscha Botha 3/4 seed from South Africa despite losing the match 3-0. She then continued her good form ending up 20th having to concede last match after falling ill.

Dave also fell ill towards the end of the tournament , before that he narrowly lost in all three of his matches although at times playing some really good squash.

Kim played in GU15 coming across a young egyptian Salma Hamy in the last 16 losing out 3-1 but then won all her remaining matches to finish a respectable 9th overall.

Last but not least was Christian, he in his first match met scottish 5/8 seed Ross Lawrie losing out in a very close match 3-1, he then played off for position ending up 25th after winning his last 2 matches comfortably.

The British Open took place just after New Year in Sheffield, it is the most prestigious junir tournament in the world and attracts the best players from all over the world! Five of our juniors travelled all girls despite a few of the boys entering but having there entry denied due to such demand for places! the girls were Sarah, Anna and Rachel Oswald and Ashley and Kimberlay Hay ( with Sara Potter making the trip in support, not playing).

Three of the girls played in the U15, Rachel the youngest got a tough draw playing the 3 seed form India, Dipika Pallikal in the first match, losing out 3-0 and then also losing her other match, however she has just moved up an age group so she would find it tough! Her sister Anna won her first match before losing to 9/16 seed Millie Tomlinson in the last 32 playing well in patches but lost out 3-0. Kim however lived up to her 5/8 seeding reaching the quarter-final after beating a very good egyptian ,Nihal Bayoumy 3-0 in the last 16, sh then lost to Canadian Laura Gemmil and finished the tournament in a very good 7th place.

Sarah ans Ashley played in the GU17, Sarah made it to the last 32 by beating Henrietta Ball from Yorkshire, eventually losing to Victoria Bell , Ashley however lost her first match to Emilie Lamilango 3-0 .

Well done to all players ,and a special mention to the parents who took the time to travel to these tournaments and give the juniors a chance to play some of the best players in the world.