Kim Champ at the U15 Nationals 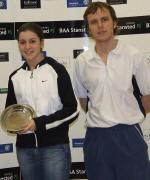 Four juniors from the area travelled down to compete in the nationals U15 championship at Bishop Stortford in Essex this weekend and it turned out to be a very successful event!

Kimberley Hay was number one seed in the girls event and was looking to win her second national title having won the U13 event two years ago. Although she was favourite it was not a foregone conclusion as she had lost the previous week to Millie Tomlinson from Derby who she was due to play in the semis.

Also competing in the girls event was Anna Oswald who had a tough draw and came across the 2 seed Katherine Quartermann in the second round. Anna however played very well and pushed Katherine all the way in a close 3-1 which proved to be by far Katherine’s hardest match on way to the final.

Kim progressed comfortably to the semis beating both Brylyn Johnson and Hannah (scottich number 1) 3-0. Then on the Sunday morning she played Millie Tomlinson in the semis and impressively got revenge from the week before winning 3-0 very comfortably and making it into final to play Katherine Quartermann.

The final was very good squash and Kim started extremely well winning first game 9/0 and looking in good shape. The second however was very tight with Katherine playing much better and eventually winning it 10/9. At 1-1 it was anyone’s but Kim always looked just that bit better and led all the way in a tense third winning 9/6. The fourth again started well for Kim and although Katherine was still playing well Kim closed it out 9/4 and took her second junior national title, a great effort.(picture above of Kim recieving her trophy from Peter Nicol)

There were also 2 boys playing in the U15 event, Richard Shellam and Christian Beck. They both lost in their first matches with Beck losing 3-0 but Shellam just losing 9/6 in the fifth.

In the plate Beck lost his first match but played very well in a close 3-0. Shellam had a good run in the plate reaching the semi-final after 2 good wins. In the semi he lost to Cumbrian Liam Barrett 3-2 after coming from 2-0 down in a good standard match.

A mention for Alex Storey who had travelled hoping to get in the event after being put on the reserve list, he didn’t get in but was great support for those who played.