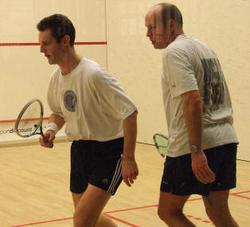 The Senior National Championships took place in Manchester last week with 6 entrants from the county over different age groups.

The most success came in the Masters events. Steve Calvert from Tynemouth was seeded 9/16 in the O40 event but progressed much further than expected! He reached the semi-finals beating 5/8 seed Rob Watkins and in the quarters he upset the 3/4 seed Duane Harrison . In the semis he lost to Peter Gunter the seed but this was an impressive run!

In the O55 was Newbiggin’s John Smith who was seeded 5/8 . He progressed as expected until he came across number 2 seed and eventual winner Phillip Ayton in the Quarters,Look out next year though he will be in the O60’s and will be amongst the favourites to win.

Ken Johnson also from Newbiggin played the O60’s and like John was seeded to reach the quarter-final which he did . He then came across the 2 seed Rodney Boswell , he lost but Boswell also went on to win the event.

There were 2 entrants in the Mens event and both had to start in the qualifying! Jon Tate won his first 2 matches to reach the qualifying finals where he played really well to lose 3-1 to Tom Richards from Surrey. Dave Barnett went one step further having just edged past Jaymie Haycocks in the qualifying finals he then played Phil Barker from Essex in the first round and lost 3-0, however he got a stage further than he ever had before.

Sarah Bowles was due to compete in the Ladies qualifying but was unwell and didn’t play.