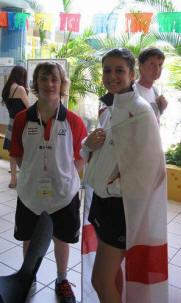 After many successes over the season Kimberley Hay was rewarded with being selected to represent England in the season ending U15/U17 European championships in Tel Aviv ,Israel.

The teams were made up of 3 with 2 boys and 1 girl. Kim played in the first group stage against Wales and won comfortably. Kim’s next match was in the Final against a strong German side. Despite both boys losing in the final Kim won her match comfortably and therefore left the event with 2 matches ,2 wins.

To represent your country at any level is an amazing achievement so congratulations to Kim.