Northumbrians at the Nationals 2007 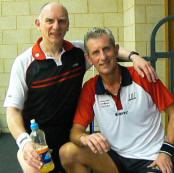 NEWBIGGIN’S JOHN SMITH DOES US PROUD.

This year Northumbria had 5 representatives in the Nationals held at the Manchester squash centre. The players had varying success.

JOHN SMITH- he has had notable success in previous age groups and this continued ths year. He reached the O60’s final losing in the end to number 1 seed Philip Ayton 3-0, great to get that far!!

KEN JOHNSON- also a seasoned campaigner in age group events Ken also played the O60’s and would you believe it he had to play his Newbiggin team mate John Smith in th Q-finals.

JON TATE- he is now a full time coach down at Birmingham Uni and is playing a lot more squash. He progressed through to qualifying finals for the second time this year beating Paul Bell and Morgan Hibberd only to once again fall short against higher seed Shaun Le Roux.

KIM HAY-she is a top junior and this is her first senior nationals at only 15. She came up against a tough opponent first up losing to Lauren Selby . She has many more years to keep trying though!

STEVE CALVERT- last year he did very well but had to withdraw this year hopefully he’ll be back.