Kim Does Us Proud in Hong Kong 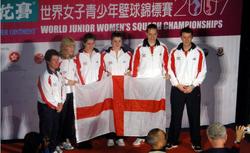 As previously reported Kimberley Hay was selected in the England team for the WORLD JUNIOR CHAMPIONSHIPS in Hong Kong in early August, she has recently returned and she again did very well.

Kim’s performance in the individual event led her to be selected as England’s number 3 for the team event. Kim helped England qualify top from their pool playing in 3 of the 4 games against Canada, Zimbabwe and Germany winning all her ties ( winning the decider vs Canada 9/7 in 5th). Malaysia were the opponents in the quarter-finals, Kim (losing 3/2) and England (losing 2-1) lost out and failed to reach the semis. Play-offs then followed and England ended in 5th place with Kim playing a big part. ( picture above of England team)