Northumbrians at the Nationals 2008 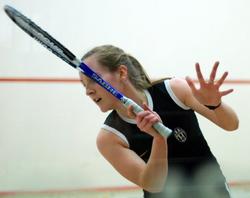 This years nationals again took place at the National Squash Centre in Manchester in February. There were 4 of our counties players competing.

DAVE BARNETT- playin in the mens event Barnett won 3 qualifying rounds to make it to the main draw where he lost to number 7 seed Joey Barrington 3-0.

SARAH BOWLES (in picture)- won her first qualifying match and then lost to Yorkshire’s Deon Saffery.

KIM HAY – also reached the second round of qualifying losing 3-0 to Kirsty McPhee.