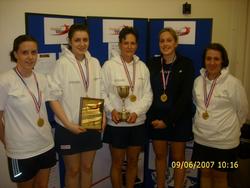 With the withdrawal of teams from South East and South West, the Women’s event was reduced to four teams contesting the finals, The Northumberland Club (North East) versus Coventry (Midlands West) in the first semi-final and Warrington (North West) against the home team of Nottingham SRC (Midlands East) in the other semi.

The Coventry team were weakened by the unavailability of their two top strings. However they were able to field a full team of five players, bringing in two promising junior girls. The match nevertheless went to The Northumberland Club, who quickly shook off any effects of the 3 hour drive to Nottingham.

The other semi-final was a closer match. With Warrington only fielding four players, they were already one rubber down to Nottingham at the start. However, with convincing wins at 1 and 2 they were still in the match. The 4th string went to Nottingham leaving the match tied at 2 all with the 3rd string rubber to be played. This was eventually won in four games by Nottingham.

Unfortunately the Nottingham number two was not available to play the afternoon match resulting in the numbers 3, 4 and 5 all moving up one place for the final, and with no reserve available, the 5th string rubber was a walkover to The Northumberland Club before the final had started.

The 3rd strings started the match and this eventually went to Nottingham, after Chris Park came from 2-0 down and saved match ball in the third game to level at 2-2 before finally losing to her younger opponent. The top strings then took to the court and Kimberley Hay dominated the play, taking the match without dropping a game. This left the 2nd and 4th strings to play on adjacent courts, and both Laura Setterfield and Eleanor Bowles decisively took charge in their matches to rapidly seal the victory for The Northumberland Club.

In the 3/4 playoff, Coventry beat Warrington.

This was the culmination of a long season in which The Northumberland Club team remained undefeated in their county league and then showed their strength and depth in the National Finals. With a mix of three extremely talented youngsters and a couple of veterans of the game, this competitive team showed that squash in the North East is continuing to flourish.