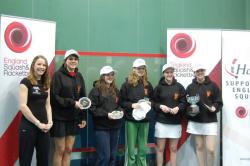 Northumbria’s girls U19 team won the National Inter-county championships on the 15th of March at the National squash centre in Manchester.

Having qualified in 2nd place of the Northern counties after 2 qualifying days Northumbria were not favourites going into the finals weekend. They first had to play Gloucestershire the top county from the South in the semis. They won 4-1, and made it through to play Yorkshire the top Northern team who had beaten Northumbria in qualifying.

Northumbria started badly losing at numbers 4 and 5 but made a comeback winning at numbers 1 and 3 leaving Hannah Cliff at number 2 to clinch victory and the title, and finishing as the top county in the country.

Not only did the U19 do well but both the girls U15 and U13 teams made it through to their finals weekend coming 4th and 3rd respectively.