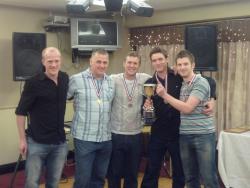 The Cup semi finals were played on Friday evening played by the top 4 teams in both the Mens and Ladies team ( although Westoe mens team had to withdraw and Northern took their place).

The finals were played before the start of Presentation Night with many of the counties top players on show it proved popular and entertaining for the spectators. The Northumberland Club in both mens and ladies competition backed up their league wins with the Cup to make it a Double Double for the club.(mens team in picture)