Girls U15 and U17 Teams Progress to the Finals 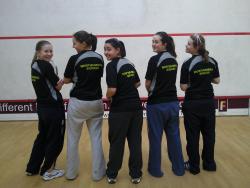 The last 2 seasons the Northumbrian girls teams have ended the season with inter-county titles. Last season the U19 team beat Yorkshire in the final and the year before the U13 team of Lucy Beecroft, Maria Bainbridge and Jayne Oswald took the trophy. This season we have 2 teams through to the finals to try and repeat the success.

The girls U15 team (in photo in their new county t-shirts) is the U13 team from 2 years ago with Charlotte Cooper and Emma Haley making up a 5 girl team. They qualifeid convincingly and have a great chance to do well when they travel to Guilford on march 20-21st to play the semi and hopefully final. Their main opposition will come from Warwickshire who have 2 of the top 4 players in the country.

The U17 team also progressed in 2nd place from the north and will play in Lilleshall in the semi-final on march 27-28. The team which is the same as the U15 along with Sam Ward who is number 1  in the squad. The team to beat is Yorkshire who although only just beat Northumbria in qualifying were without 2 players who could come along and strengthen their squad.