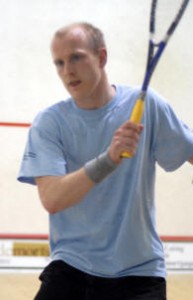 David Barnett became the Summer Open Champion for the umpteenth time after a busy weekend at the club which saw just short of 50 players compete in 80-odd matches, resulting in 1-8 finishes in the A, B, C, D, E and F events and five entertaining sessions of squash.

It was a pleasingly strong entry, both in numbers and quality, with a gaggle of young county players vying to challenge Barnett’s domination of the event. Many were looking forward to a challenge from Paul Lord, but the former US Open and Proctor finalist tested out a niggling injury in his first match on Saturday and decided not to risk it further.

This left the field open for the young guns, and Matt Sampson, Matt Prior, Richard Shellam, Liam Gutcher and Michael McIntyre all provided great entertainment in a series of quality matches. They couldn’t, however, prevent Barnett and Peter Kullar setting up a repeat of last year’s all-Jesmond final, which saw the same result as Barnett ran out the 3-0 winner. Third place went to Shellam as he completed a thrilling 3-2 win over Gutcher just seconds before the main final concluded.

The B event featured a home winner as James Wilson, dispensing with the flowing locks for the final session, saw off a spirited challenge from Consett’s Darren Watson to take the title, with Steve Elwick finishing third.

The C event was dominated by the women with both semi-finals being all-Female. Lucy Beecroft scored a fine win over Laura Setterfield in the first semi, while Carole Page – a multiple national masters champion – powered he way past Hannah Cliff and proved too strong for Lucy in the final.

In the E event it was an all-Junior final, Hexham’s much-improved Simon Graham beating Dean Follin in the final with Paul Albone claiming the third spot on the podium.

Dramatic action in the later stages of the E event saw a popular home winner and a new phrase coined.

In the semi-finals Steve Cruz somehow contrived to lose after being 2-1 and 10-4 ahead, squandering seven match balls as Simon Ho levelled the match 13-11. Steve then went 6-0 up in the decider before capitulating again as Simon completed a remarkable two-stage comeback, taking the fifth 11-9.

Henceforth when someone snatches defeat from the jaws of victory, it shall be termed “doing a Cruzy”.

Simon’s luck and/or energy ran out in the final though as Dave Sundin came from 2-1 down to take the title, Cruzy trailing home in third place.

Thanks to everyone who entered, helped out and reffed … see you for the Club Championships in November.