It has been a very successful time recently for many  Northumbrian players in various age groups and in various places. 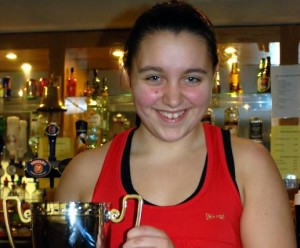 LUCY BEECROFT has continued her fantastic season firstly winning the Edgbaston Junior Open at u17 and then winning the ENGLISH JUNIOR CLOSED in Surrey at u15 level without dropping a game throughout beating Georgia Kennedy in the final.

SAM WARD also won the Edgbaston Junior open in the u19 category. Along the way she beat number 2 seed Sophie Lemon and number one seed Lucy Townley and finished a credible 6th at the ENGLISH JUNIOR CLOSED>

Other notable results at Edgbaston- Jamie Todd finishing 3rd in the B13, Laura Neill finishing 10th in G13 (also 12th at the English Closed) and Chris Wiggins 12th in B15.

JOHN EVANS won a hat-trick of Welsh O50 titles beating Mike Workman 3-0 in the final and will compete for Wales in the home internationals later in the year.

RUSSEL HUNTER made it to the final of the O45 Scottish masters losing out to Alan Thomson, that should also earn him a place in the Scottish team for the home internationals.