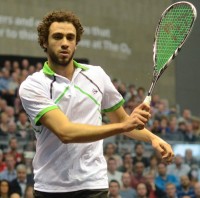 [/dropcap]I’m really looking forward to the new season. My preparations are all done; I worked out an 8 week fitness programme with my coach Johnny Noclue – and even though I was on holiday for 2 weeks, away with work for 2 and tweaked me groin for a couple of weeks, – for the rest of the time I’ve been proper focussed. And I mean, like, total.

I’ve been working on a combination of fitness and technique – I call it fitnique. As you all know, I’ve got some great shots which I can play from anywhere on the court depending on exactly how badly I’ve been sent the wrong way. But I wanted to add more.

So, I’ve been working on a drive to length which looks like it goes to the back of the court, but it doesn’t. It’s a fooler. My coach says it’s like a squashical illusion. I think he made that word up, like when he called me a ‘talent-void’. That’s just made up. It’s a bit technical for most of you to understand how it works, but let’s just say it’s a heady talent cocktail of spin, slice, drop and lob that make it work. Look out for it soon – if you can see it that is! It’s that deceptive.

I then moved on to trying to improve my volleys – but we couldn’t remember what the grip was for them, coz it changes depending on what side you want the ball to go out on. We decided my volleys are probably good enough anyway, as I’ve been playing them before they were invented. So on that day we played the quiz machine in the bar.

But then – drop shots. And that’s where I’ve seen the biggest improvement in my game. I’ve developed a drop-shot which is completely impossible to see. Basically, you shape up to play a drive, – but you don’t actually play a drive – you play a drop shot ! In a routined full 1-minute exercise, my training partner Freddy Forehand thought that every one of my shots was going to be a drive – but they weren’t, they were all drop shots! Well, apart from the 6 that went out, the 2 that hit me on the leg and one that hit him in the eye. And that’s after both his new hips and his plastic knee had warmed up. That’s how good they are.

So yeh, bring on the new season. I’m sure I’ll remain unbeaten till our 1st match, as I did last year, and the year before actually. Of course I’ll be using FaysBook and Twittar to keep you updated, and I’ve heard some of my matches may even be getting streamed live to some of your clubs! Laters. Bobby.