The 17-year-old from Gosforth adds his name to a very short and special list of junior county players – selected for the award by the top coaches in the area.

In only its fourth year, the award has become a cherished tradition at this annual junior showpiece tournament, named after, and in honour of, the late John Dale, professional squash player from Tynemouth.

Designed to recognise an outstanding contribution to the sport, and to reflect how players conduct themselves on and off-court, the coaches this year selected a player who picked up a racket only 5 years ago – and who has since battled to establish himself as one of the best juniors in the county, winning four trophies in the last 12 months (including the Men’s County B Championships and the 2012 County U19 title).

“Cai loves squash in any way it comes – playing, coaching, watching,” said County coach and ex-pro Dave Barnett. “His enthusiasm and hard work have seen him rise remarkably in just a few years, and with a much-improved calmer attitude on court, he is a well-deserved winner of the John Dale Trophy.”

The award is named after a North East squash legend – John Dale is fondly remembered as a multiple British Junior Champion, and former World No 89 player – a gentleman off the court and a real flair player on it. Dale sadly lost his battle with cancer aged just 33 in 2010, and his mother Linda was on hand to present the trophy to its latest recipient.

“He never fell out with anyone, or bore any malice – an exceptionally rare quality that so few of us have.”

Barnett added: “John was a player who just loved being on a squash court. He played with great skill and fairness and he was a pleasure to watch. He was also a very friendly and sociable guy. Every time an award is presented it reminds me how sad it is that he’s not still around.” 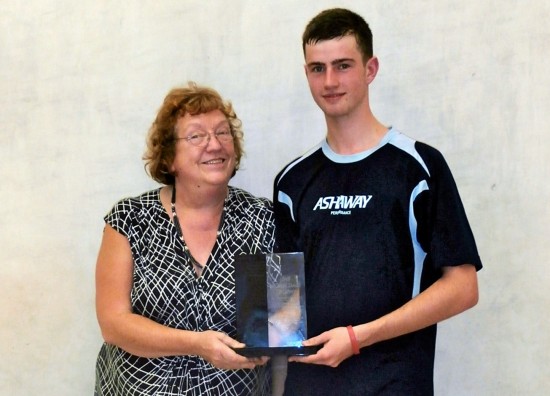