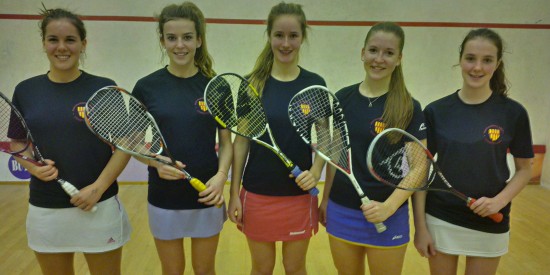 SWEATY, smelly and without make-up, this is how the County U17 girls chose to be pictured, having secured their place in the national finals . . .

And they will be joined in the last 4 showpiece event by their younger ‘sisters’ the Girls U13 side, who finished a very close second in a hotly-contested four-team group.

Trophy final glory beckons for the Girls U15 side (see Ian’s post below for more details!) after they reached the event by again finishing second to Cumbria – well done to Laura Neill, Emma Rowell, Amy Rowell, Martha Spalding and Daisy Dobson.

The U13 boys are also heading for the Trophy finals after showing their class with THREE  5-0 victories in Liverpool, over Merseyside, North Wales and Derbyshire.

What a team that is with Mad Max Forster, Lethal Lewis Follin, Andrew ‘Ship-shape’ Shipley (look, it’s late, OK, and I’m tired), Dirty Harry Little and Nathan ‘Napalm’ Dobson – stick a fiver on them to win the Trophy finals next year, with a side bet that all five will end up on the floor at some point after diving headlong to save a lost cause (11-10 on, widely available).

Meanwhile, with Northumbria’s finest in action all over England’s green and pleasant land on November 23/24, there were high hopes for the Girls U17s on home turf and they (just about) lived up to expectations.

The team formerly known as the Spice Girls gleefully threw off the restricting shackles of that shallow moniker to win ugly against Cambridgeshire and, er, lose ugly to Yorkshire.

Still, second spot on the day was good enough for Josie Barker, Charlotte Cooper, Georgia Webster, Tegan Younger and Ellie Watling to book their place, alongside the Girls U13s, in what, for the purposes of this article, will be dubbed the Holy Grail of Squash.

Firmly ensconced at Headquarters, General Barnett was waxing his moustache while tinkering with his masterplan as his young female troops went over the top at the Northumberland Club, putting County glory ahead of life and limb . . .

Ellie Watling was rushed in to the arena on a hospital bed and had to be winched onto court such was the severity of her hip injury – the likes of which had never been seen before by the RVI medical staff (one consultant, Dr Hip said, and I quote: “This has never been seen before”. Funnily enough, his brother, Dr Hop, had been treating Maria Bainbridge’s foot injury – more of which later).

But it wasn’t enough to stop Ellie losing 3-0 in the opener . . . then Georgia Webster decided to make it interesting, being edged out 3-1 by Yorkshire No 3 Zoe Kaiser. As rumours of a betting sting swept the arena, Tegan Younger found her mojo to make it 1-2 in matches with a 3-0 win, then Charlotte Cooper lost a very tight 3-0 to Megan Kaye.

The honours went to Yorkshire then, but they lost the battle of the top seeds when the fast-improving Josie Barker clinched it 3-1 on the glass back to restore home pride.

With Yorkshire beating Cambridgeshire 4-1 while our girls had a long lunch and some beauty sleep, the home team were sent into battle knowing that victory would secure the team a crack at the national finals darn sarf in the New Year.

Ellie was rushed out of the operating theatre after emergency surgery to win 3-0 in fine style – then Tegan had to swallow some of her own medicine (a winning spin-shot off the outside 1mm edge of the racket – even flukier than anything she has ever produced) to overcome her jealousy and win 3-0 too.

Cambridgeshire’s Emily Fuller was caught in the Web(-ster) as Georgia found her rhythm to win in straight sets too.

Not to be outdone, and with the scent of victory in their bloodthirsty nostrils, Coops and Barks held sway by a similar scoreline, and all the talk was of dancing, parties, a bit of light make-up & moisturiser, and blue Wicked on a weekend away to remember (and that was just the dads. Tony in particular).

The girls ignored a request from the team photographer to clean up before the official photo session – so there you have it. This is what victory (ok, and a defeat) looks like. Surely nothing can stop the girls now – unless Georgia’s victory dance – watched keenly by talent-spotters and now trending on YouTube – was enough to whisk her away from the team to the bright lights of LA as one of Miley Cyrus’ backing dancers).

Meanwhile their big sisters the Under 19s had their own problems to contend with. Meatloaf may have thought that two of three ain’t bad, but he didn’t have Caitlin Vitty’s back problem and Maria Bainbridge’s drinking injury (sustained while “dancing in high heels – I think” to contend with! With Emma Haley getting her sick note in first, Caitlin and Maria were paid big bucks to play on with their respective medical problems (due to be featured on a late night Channel 5 special soon) as a two-(wo)man team.

Needless to say, neither could fire on all cylinders and were edged out on the day – with the same fate befalling a strong trio of boys teams at U15, U17 and U19. 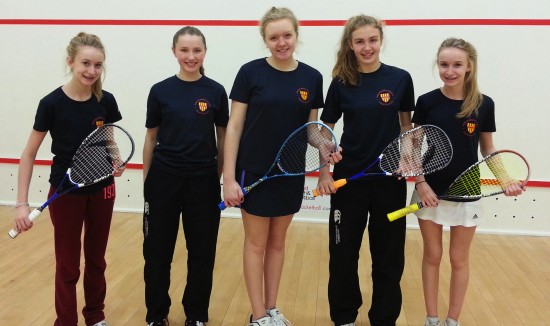 THE GRINNERS TAKE IT ALL: Amy (we think*), Laura (who played all her matches without a racket), Daisy, Martha and Emma.

*identification by Tegan so all complaints to her, please