WELL done the Northumbria County junior teams who rounded off their season at the National Finals – the Girls U17s leading the way with a third-placed finish.

The U17 Girls team led the way with a third-placed finish at the National Finals in Birmingham, followed by the Girls U13s who finished 5th best team in the country at Surrey.

In the Trophy finals, the Boys U13s won two matches out of three to claim runners-up spot, while the Girls Under 15s matched that achievement with a second-place Trophy finish at Cumbria.

Edgbaston Priory was the venue for the Girls U17s, with a strong team of Charlotte Cooper, Josie Barker, Georgia Webster, Tegan Younger and Ellie Watling wearing the County colours, I mean make-up.

Aided and abetted by a four-strong coaching team of Tim Barker, Ben Watling, Mark and Diane Cooper – (all fresh from competing thier UEFA Pro Licences in the nick of time), hopes were high for a team who pride themselves as much (more?!) on their courtside appearance as their bloody-minded ruthless pursuit of results at all costs.

So even their first match – a 5-0 defeat to an epic Gloucester side – was a comfortable victory in the fashion stakes (or so they tell me).

Gloucestershire fielded at No 5 a girl who reached the final of the Northumbria Junior Open earlier this season – which gives a hint of the task which befell our girls.

The teams licked their wounds and overcame their depression by inventing rap songs and producing ‘Gangnam Style’ videos into the early ours (check out their YouTube channel), then emerged refreshed to take on South Wales in a Sunday Clash which ESPN had billed as the Battle of Britain.

Determined to end on a high, our girls bounced back, refreshed from two solid hours’ of sleep grabbed between gossip and rapping, to win 4-1 on Sunday morning against the Welsh – Charlotte, Josie, Georgia and Tegan all fought hard for victories, with Ellie playing well but just edged out at No 5.

The Girls U13s had to travel all the way to Surrey for their final games – Lowri Waugh, Lucy Anderson and Aanya Hamilton lost 3-0 to Warwickshire and 2-1 to Kent but hit top gear with a 3-0 win over hosts Surrey in the 5th-6th place play-off.

Poor Andrew Shipley fell ill just before the Boys U13 Trophy final in Warwick and had to withdraw. But a strong team of Max Forster, Lewis Follin, Harry Little, Nathan Dobson, Tim Charteris and Thomas Moore played out of their skin.

Just edged out 3-2 by Warwickshire in their first match, the Northumbrians proved far too strong for Oxforshire (5-0) and Suffolk (4-1) to finish second overall.

The Girls U15 team of Laura Neill, Emma Rowell, Amy Rowell, Martha Spalding and Daisy Dobson had a hop, skip and a jump over to Carlisle for their Trophy final – over to our Live Twitter Correspondent Ian Rowell for the lowdown on this one . . .

In an attempt to have the day wrapped up for the two counties making the monster journeys back to Hampshire and Hertfordshire respectively, proceedings kicked off slightly early & Team Northumbria went in to action v Hampshire at 10:00am and proceeded to dish out a crushing defeat to their opponents.

Both Daisy and Martha left off where they finished in the stage 2 matches showing pure ruthlessness & controlled aggression to get off to a great start.

With Hertfordshire winning the corresponding fixture against the host county it made the match after lunch (in Beehive pub across the road J !) a decisive one.

From what I saw of all the matches it was difficult to fault anyone’s performance. There were battling qualities displayed in equal measure by all of the girls.

Emma showed great guile to twice come from behind in her match, Laura only lost to a rapidly improving Amber Marshall – and Amy was perhaps feeling the effects of some still undigested Lasagne!

Rumours spread around the venue that things were very close between Northumbria & Hertfordshire – and on game points at least, it was.

After two matches a piece Herts had racked up 31 points to Northumbria’s 30.

It was even slightly muted that the result would be determined on points alone – but after a brief call back to base (@dbsquash) it was established that our girls needed Hampshire to overcome all the odds and beat Herts. and us to beat the hosts to achieve overall success on the day.

Come the final match – the girls re-focused on the task in hand and went on court to avenge the defeat they suffered to Cumbria at the 2nd stage of the competition in Cambridgeshire………and avenge that defeat they duly did – in quite emphatic style.

Both Laura & Amy proceeded to reverse their individual results from Stage 2 with ruthless performances at 1 & 3, while Emma came up against one of her nemesises and despite a battling display lost out.

Particular mention & credit to Laura who battled & tussled with her local counterpart in an, at times, feisty encounter where neither player wanted to give either an inch.

Herts. went on to score the predicted victory over Hampshire & take the spoils on the day, and Team Northumbria a close 2nd.

Team Northumbria girls all conducted themselves impeccably both on and off the court. 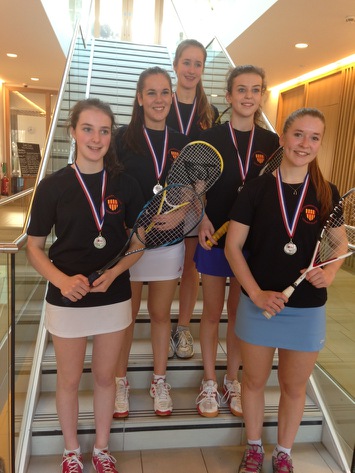 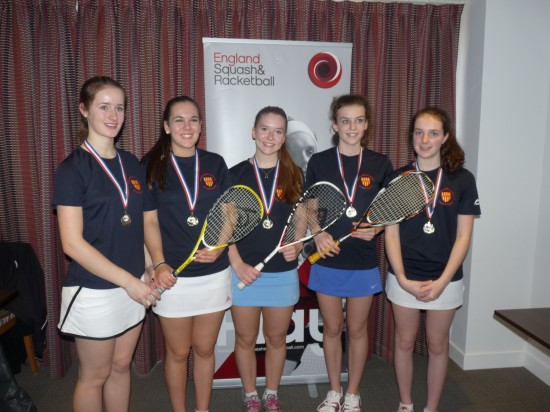 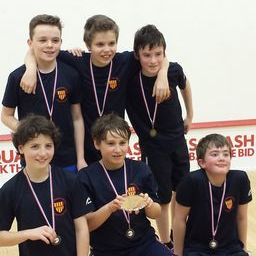 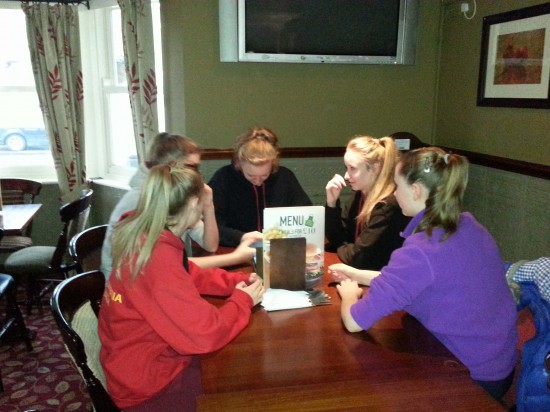 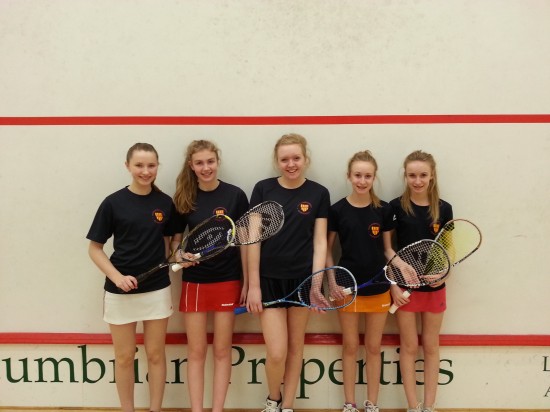