On a busy evening at the Northumberland Club in Jesmond which saw the start of the BSPA/WSA women’s event and the graded events alongside the PSA quarter-finals, top seed Shaun Le Roux was the first player through to the semi-finals with a solid straight=game win over Frenchman Jean Lezaud.

”It was quite tough at the start of each game,” said the South African, “but I got into my stride and I felt I was playing better than yesterday so I felt pretty comfortable at the end of each game.”

The second match was, on paper, the closest of them all, and so it proved on court as ffifth seed Geoffrey Demont overcame fourth seed Peter Creed in an entertaining 68-minute four game tussle. The Frenchman took the first 11/6 and led 10/6 in the second, but Creed fought back to level 13/11. The Frenchman was again in the ascendency in the third, regaining the lead 11/4.

The fourth was close all the way, the crowd being entertained and bemused in equal measure by Demont’s sporadic discussions with referee Lezaud, in French of course! Demont got a first match ball at 10/9, and managed tro take the match 14/12 on this third.

”I played very well compared to yesterday,” said Demont. “I had a good feeling in my racket and I played at a good pace from the first point to the last, which surprised him I think. It’s a good win for me, I enjoy playing here and I’m taking pleasure from playing which is the important thing.”

Third seed Mahesh Mangaonkar got the better of the third quarter-final, a match against Nathan Lake that featured ferocious hitting from start to end. The Indian led 10/6 in the first before finishing it off 11/8 with a boast that squirted out of the nick, then came from 5/9 down in the second, saving three game balls on the way to doubling his lead 14/12.

The fearsome pace at the end of that game had to take its toll, but not until Lake had taken a 5/1 lead in the third. Mangaonkar kept up the pressure, levelled at 6-all and although Lake fought to the end it was the Indian’g game 11/6 after 48 tough, tough minutes.

To complete the semi-final lineup second seed Kristian Frost ended the run of qualifier Christophe André in three games, all of which were far from easy as the big Frenchman pushed the world #57 all the way, only fading in the last handful of points.

”I knew it was going to be tough,” admitted Frost, “I played him in a $5k final in Israel, he’s such a good player and people tend to underestimate him because of his size. I’m in the tournament now!”

Action starts at noon on Saturday with the women’s quarter-finals with the PSA semis starting at 17.00 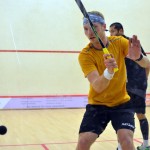 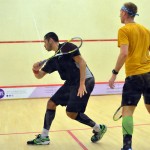 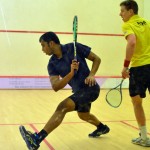 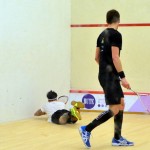 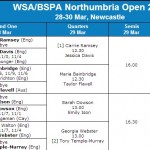 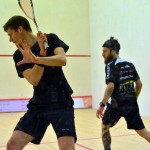 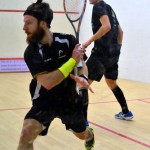 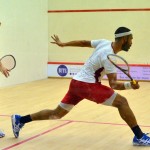 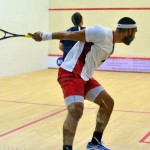