Photo Gallery from this year’s Finals and Presentation Evening 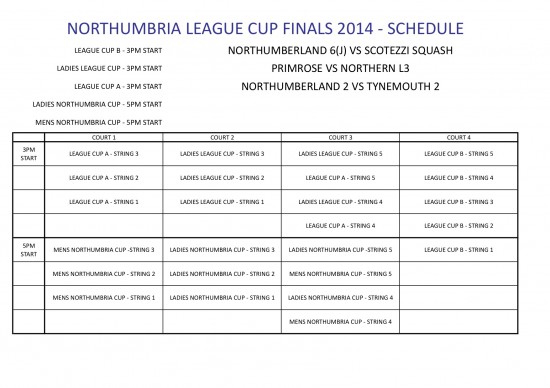 Throughout the season, teams across the region have been battling it out in the League Cup competitions.

From 22nd April to 26th April, The Northumberland Club will play host to the Semi-Finals, and Finals in all our cup competitions.  The season will then draw to an end with our Presentation Evening.

This season has seen a lot more interest in the competitions, with teams realising its a chance to win silverware.  In League Cup A, there are no surprises, the top seeds Northumberland 2, Tynemouth 2, and Ashington 1 negotiated their way through the early rounds with little fuss.  Completing the last four is Chester Le Street 1, who will be looking to retain the title they won last season!

In League Cup B, Tynemouth 4 negotiated a preliminary round before joining the main draw, and continued to knock-out higher ranked Westoe 3, and Newcastle University 3 to take their place in Finals Week. Not to be out done, Northumberland 6(J), who have secured promotion, showed the division above that they will more than match them next season with wins against Consett 2, and Sunderland 3 in the cup. Chester Le Street 3 add to the club’s growing reputation as the Cup experts in joining the last four, along with Scotezzi who are the highest ranked team left in the competition.

In the Ladies League Cup, a 4th team from Tynemouth to make the finals week will be Tynemouth Ladies 3 who narrowly escaped defeat against Eldon Leisure Ladies, whilst Northern Ladies 3 were too strong for Northumberland Ladies 2. Making up the last four are Primrose Ladies, and Newcastle Uni Ladies who take their places on default.

As if that wasn’t enough, the traditional season-ending Northumbria Cup will take place at The Northumberland Club on Fri 25th, and Sat 26th April. The top four teams from the Mens Premier Division, and Ladies Division 1 will compete for this coveted trophy.

Please see amended schedule at top of this post.

The Presentation Evening will commence at 7.30pm.  (Please note this is a ticket event, which must be purchased in advance.)

There will be live music from “The Conduct Warning’s” – a band formed by our own squash players!  Plenty of awards to give out, and a buffet dinner.