Over 55s through to National Semis again 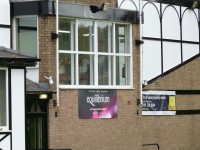 Following our runners-up finish in last year’s National Finals, we travelled to Bowdon Cricket Club, Altrincham to take on Cheshire and newly-promoted Yorkshire and Warwickshire, knowing that the top two counties would go forward to the Finals weekend next March.

We struggled to get started against hosts Cheshire, with Colin, Andrew and Ron all losing 3-0, John losing 3-1 and only Jon saving our blushes with a 3-1 win over Rob Blair as we went down by a match score of 1-4 (4-18).

John was rested for the 2nd match of the day against Yorkshire (who had won their opening match against Warwickshire 3-2 (15-9)). Again we found ourselves quickly 2 matches down after 3-0 defeats for Alan and Colin. It was looking bleak as Andrew lost the first 2 games and was 7-3 down in the 3rd game against wily campaigner Dave Lines, but then he found his form and heroically hauled himself (and us) back into the match by winning the 3rd 9-7 and the 4th 10-8 (after saving four match balls from 6-8), and rounded off a 3-2 win when Dave had to retire with a pulled hamstring early in the final game. Then Jon levelled the match with an efficient 3-0 win over Phil Wakefield, and finally Ron completed the team fight-back with a quickfire 3-0 win for a match victory of 3-2 (14-8).

Meanwhile in the other evening match Cheshire beat Warwickshire 3-2 (16-7) meaning that overnight the team points were: Cheshire 34, Yorkshire 23, Northumbria 18, Warwickshire 16.

So to grab 2nd spot and qualify for the National Finals group, we needed to beat a depleted Warwickshire (who had lost their numbers 1 and 3 to injury against Cheshire) and hope that Cheshire would overcome Yorkshire.

Fortunately overnight there was no repeat of last season when we had to evacuate our rooms at the Premier Inn following a fire alarm, and the traditional large cooked breakfast on Sunday set us up nicely for our final match against 4-man Warwickshire. Colin having been handed a walkover at number 5, John and Andrew quickly secured an unassailable lead with 3-0 wins. Jon, the outstanding number 1 player of the weekend, again cruised to victory 3-0, with only Ron going down 0-3 against the experienced Mo Sawar, for a match score of 4-1 (17-3).

As an aside, all Over 55 events are still played under English scoring (no-one knows why, when in all other competitions we now play Point-A-Rally). In Ron’s match against Warwickshire he nearly took the 3rd game against Mo, but Ron having recovered to serve at 8 all, Mo asked for “set 1” and won the next rally, making it “hand out, 8 all, match ball” to Mo, but at this point the referee (not for the first time) got confused between English and PAR scoring and called “9-8, match to Warwickshire 3-0” at which point Ron thought he’d lost the match. Eventually after some persuading the referee realised her mistake, called the correct score, and Ron won the next rally (making it “hand out 8 all, game ball” to Ron) only to lose the next two rallies to finally lose 9-8 in the 3rd after all! It would be a lot less confusing (and perhaps more appealing to the Olympic Committee) if we could agree on a standard scoring system throughout the squash world.

So Northumbria finished runners-up in the group meaning that for the second year in succession, we’re off to the Finals weekend in March 2015. We’ll play a semi-final against the winners of Group B, likely to be reigning national champions Middlesex who beat us in last year’s final and have strengthened further this season! Still you never know what could happen on the day.

Congratulations and thanks to the whole squad for making the trip and achieving another great result, and especially to our drivers Ron and Alan for getting us safely there and back.