HOME club Northern showed their strength in depth by producing four of the 10 champions at their 2015 Junior Squash Open.

Under 19 champions Josie Barker and Cai Younger led the local charge with fantastic performances, and there was strong back-up from the impressive Michael Mattimore (Boys U17) and Megan Evans (Girls U13).

Northumbria glory was also provided by Tynemouth hotshot Tom Walsh who, despite being unseeded, took the Boys Under 11 title with some aplomb.

And there were second-placed finishes for Northern trio Milan Stach (Boys U11), Lucy Anderson (Girls U13) and Tegan Younger (Girls U17), while Northumberland Club produced runners-up in Sam Aiston (Boys U13), Max Forster (Boys U15) and Charlotte Cooper (Girls U19).

A record 120 players came from far and wide to support an event, sponsored by Lawson & Thompson Solicitors and also supported by Dunlop and Sport Newcastle.

A huge turnout ensured some epic on-court battles in a competition fast becoming a favourite on the North of England junior squash calendar, played out in front of a bumper crowd on Valentines weekend in February.

And the cream of the county’s young squash talent played with plenty of heart to put up a strong showing against the best from Cumbria, Yorkshire and further afield.

Josie Barker had, on paper, two very tough matches in front of her in the round robin U19 girls event. But consistent volleying and indefatigable retrieving earned her a 3-0 win over reigning U17 County Champion Georgia Webster in her first game.

And the fast-improving Barker followed that up with an even more energetic performance in beating the hard-hitting Charlotte Cooper 3-1 in Sunday’s showpiece game to lift the U19 title.

Cai Younger had booked his place in the Boys U19 final after beating in-form clubmate Sam Broughton the day before – and then coming through a marathon 90-minute five-setter against Jesmond’s Dan Wareing in the semi-final. It was a gargantuan effort from both players who played some great stuff in the tournament’s longest match.

Yorkshire shotmaker Elliott Ridge lay waiting in the final – himself having seen off No 1 seed Dan Harrison 3-2 in his semi. And the visiting player stormed into an early 8-4 lead in the first game, only for Younger to fight back and take it 11-8. Consistent driving and some flair finishes allowed the home player to stay, just, in control and see out a deserved 3-0 win to lift the trophy.

Former England international Michael Mattimore is never far away from the winner’s podium wherever he plays – and the Northern starlet lived up to his billing again by taking the Boys U17 in style.

Mattimore won a hard-fought final 3-0 against Yorkshire rival and No 1 seed Ben Merchant – and he earned his right to be there with strong wins over Joe Wareing (Northumberland Club) and Ben Cross (Durham & Cleveland).

Megan Evans is a player to look out for in the future – and she showed her strength at U13 level with some strong performances on her way to becoming a Northern Junior Open winner.

The No 1 seed came through a strong eight-girl Monrad field, and finished off with a 3-1 final win over Northern clubmate Lucy Anderson – a repeat of last October’s County Championship final result.

Another Pocket Rocket is Tynemouth’s Tom Walsh, who, spurred on by his new blue Asics shoes, is following hot on the heels of his older brothers Andrew and Matthew on the junior squash circuit.

The youngest Walsh did not even have a seeding in the U11 event, but that did not faze him as he saw off top-seeded Tom Miller in the semis and then No 2 seed Milan Stach of Northern in Sunday’s final.

Other Northumbria runners-up were Jesmond’s Sam Aiston (Boys U13) who went down 3-1 to Cumbria’s Matthew Harrison in the final, Tegan Younger of Northern (runner-up in the Girls U17s to Cumbria’s Eve Driver) and Max Forster of Jesmond who lost a hard-fought final to Cumbria’s Adam Goad – recently picked for England – in the Boys U15s.

Comeback of the tournament has to go to Yarm’s Lucinda Cross, who lost the first match of her Girls U15 final 11-0 to Yorkshire’s Poppie Jaram – only to bounce back and take the title 3-1.

And another impressive performance came at Girls U11 level, where 9-year-ol Lexie Ogram of Yorkshire proved too strong for the (mainly older) opposition; she took the title with a strong final display against Durham’s Jessica Weatherspoon.

Thanks go out to tournament organiser Richard Vitty – whose junior coaching at Northern doubtless helped ensure such a run of success for the home-based players – and those who gave up their time to help out (Lesley Vitty, Jem Stach, Dave North) and to mark, in particular Liam Gutcher, Matt Hardy and master referee Joel Birch-Machin. 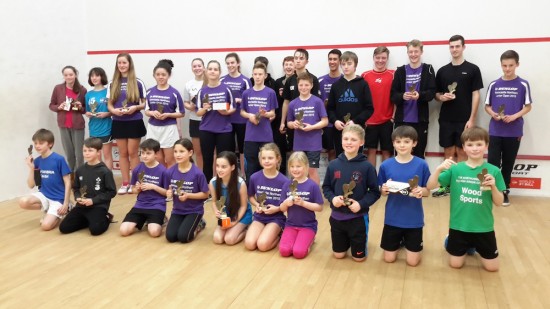