There was a host of Northumbrians (I couldn’t say Geordies as they included a Welshman, a Brummie and a Makem!) that entered the Nationals this year.

In the Mens qualifying event we had Northumbrian #1 Dave Barnett (Northumberland Club) fighting through to a place in the main draw. Dave played Greg Lobban [9/16] in the first round with Lobban running out the eventual winner in 27 minutes 11/7 11/6 11/4.

In the Ladies qualifying event we had the newly crowned Northumbria Closed Champion Lucy Beecroft (Tynemouth) making it into the main draw for the first time. Lucy was drawn against Alison Waters [2] and Alison took the match in 19 minutes 11/4 11/1 11/3. Also playing in the qualifiers was Sam Ward (Tynemouth) who lost in 22 minutes to Rachel Chadwick 11/4 11/5 11/5.

In the Masters events we had representatives in the Mens O55, Mens O60, Mens O65 and the Ladies O50 events. 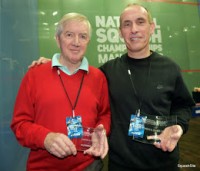 The Mens O55 event had Jon Evans (Tynemouth) seeded [2] and looking to go all the way to the final after having to pull out last year due to injury. This he did with victories over Eric Southern, Ged Martin and Gawain Briars in the semi-final. Jon played Dermot Hurford [3/4] in the final winning in 49 minutes 5/9 9/3 9/7 9/7 (HIHO scoring) to become the National O55 Champion at the first attempt. Congratulations Jon! 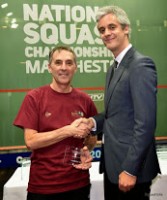 The Mens O65 event had Derek Collins (Northern) seeded [5/8] looking to at least improve on his seeding. Derek more than did this with victories over Tony McGuire, David Hardem, Larry Grover [3/4] and Alan Hendry to take his place in the final. Derek played Aubrey Waddy [3/4] and started convincingly by winning the first game, Aubrey came back into it and won the match in 35 minutes 3/9 9/6 9/2 9/6. Unlucky Derek!!

The Ladies O50 event had Louise Robertson (Tynemouth) making her debut in the competition. After her first round opponent pulled out Louise played Sarah Howlett [3/4] losing in 19 minutes 9/4 9/3 9/3. Better luck next year.

All in all a good year for our Northumbrians…