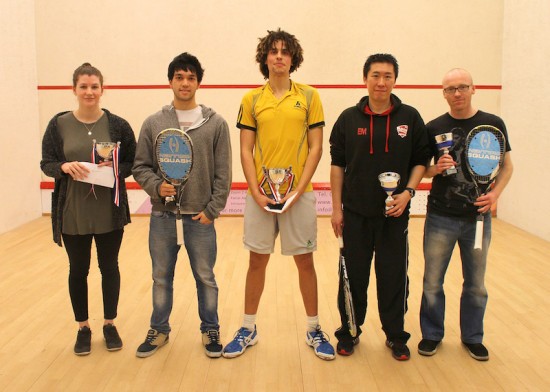 But there were many others who shared the plaudits in a thrilling PSA tournament, arguably the best in this competition’s short history.

Trick shots, thrills, spills and panache were supplied on tap, while some marathon contests throughout all the competitions kept spectators enthralled throughout – and made for some later-than-planned Friday and Saturday night drama.

Real stars of the show were tournament organisers David Barnett and Simon Ho, and, of course, the tournament sponsors – whose support keeps a top-class weekend on the PSA squash calendar. 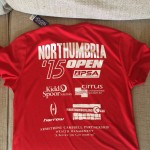 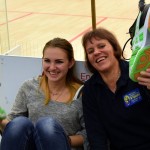 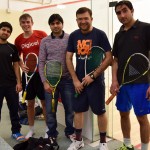 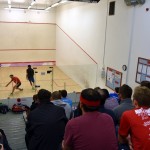 Derby-born Hinds showed us all what a top-100 player could do, as he strode to the title at the loss of only one game (well done, Dave Barnett!!), and beating some of the region’s finest on his way to the final.

Nunthorpe’s Josh Harris put up a brave fight in round 1, then Barnett (3-0 winner over Tynemouth’s Jon Evans) lost 3-1 in a fast-paced and high quality quarter-final, after turning on the style to take the second 11-5.

Northern’s Liam Gutcher did best of the local players in reaching the last four – he played out of his skin to beat Bolton professional Julian Tomlinson 3-2 in his quarter-final, finishing strongly 11-5 in the fifth after a marathon effort.

But a Saturday night semi against Hinds was a step too far, with the world No 94 turning on the style with a stunning array of boasts, drops lobs – you name it – to keep Gutcher guessing and complete a 3-0 win to book his place in Sunday’s final.

Waiting for him was Steve Wykes – the world No 384 from Chichester who won many new fans with his huge array of attacking shots.

Wykes put in an inspired first-round display to dispatch Newcastle University No 1 Michael Mackay in round one, with more than a couple of wristy topspin shots so well disguised that even he couldn’t recognise them.

Taminder Gata Aura was the next victim in the quarters, while a marathon semi-final – arguably the match of the tournament – against lightning-quick Bermuda pro and training partner Micah Franklin – kept the Saturday night crowd on their toes until Wykes sealed it 11-8 in the fifth.

Hinds’ unrelenting pace and accuracy was too much for the 25-year-old in the final, which went 3-0 to the favourite, but again Wykes produced some great moments which belied his relatively low ranking.

The third Northumbria quarter-finalist Cai Younger, in his first season as a PSA player. The Northern whipper-snapper came a cropper to Micah Franklin in the last eight – he had his moments, but the consistency and fitness of his full-time opponent proved too much. 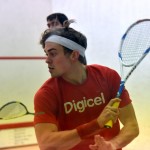 Younger had reached the quarters after a thrilling 90-minute marathon first round win in a ‘local derby’ the night before to give him his first PSA win.

Living up to the nickname I am just about to give him, Sean ‘The Machine’ Millington carved out a 2-0 lead with some hard-hitting squash before Younger found his rhythm and accuracy to level things, and then go 9-5 up in the fifth, on the brink of a hard-earned victory.

Millington, though, would not give up. He produced some stunning retrievals to fight his way back into things then level at 10-10 – although he was suffering with cramp by this stage.

An epic rally followed, 11-10 and matchball to Younger, and Millington, having bravely dived in vain to retrieve a short angled cross-court drive, lay prone, with his leg cramped up rigid, and simply could not continue after giving his all. 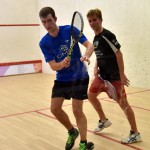 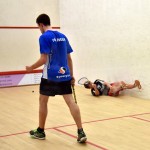 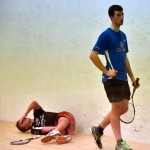 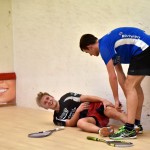 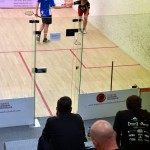 In the main event plate, Jamie Todd hit top form to see off two formidable opponents. First up was Tynemouth No 1 – and newly-crowned British Over 55s champion – Jon Evans.

The Toddinator took this 3-1 – a great effort under pressure, with three of the four games going to two clear points. Michael Mackay was next up, and the University No 1 was in fine form on his way to a 2-0 lead in the plate final (11-4, 11-6). It was Mackay’s to lose, now

Todd, though, is renowned for his fighting qualities – he mixed up the play, went on the attack and battled back to take the next three games and clinch the trophy.

That was the story of the Men’s event – although special mention must go to Paul Lord who produced some stunning squash in the two and a bit games of a super first round clash with Liam Gutcher – both players hitting some great winners – before injury forced his retirement. 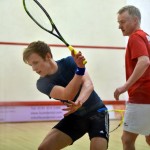 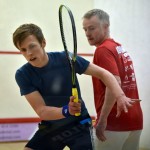 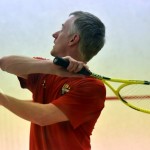 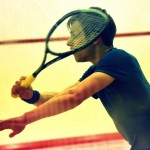 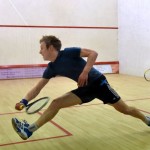 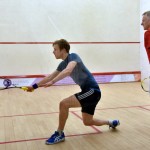 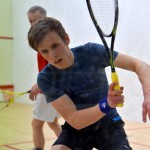 In the Ladies event, honours again went to the No 1 seed, Carlisle’s Victoria Bell, who saw off local favourite and second seed Sam Ward in an entertaining final. Bell took the first then squeezed out the second 12-10 as Ward went on the attack.

Some stunning serves from the Tynemouth girl – and some strange mistakes from the Cumbrian – saw the third go 11-0 to Ward, before Bell rang the changes (sorry, couldn’t resist) to take the title with an 11-7 win in the fourth.

In the ladies plate, Northumbria University No 1 Hannah Crichton reached the final and went in against team-mate Eilidh Bridgeman. Underdog Bridgeman, from the Cayman Islands, hit top form and threatened an upset, only to be squeezed out 13-11, 11-9, 11-9 by the consistent Cumbrian.

Some bumper draws – and a plethora of final game deciders – packed out the B, C and D events – well done to Eldon Leisure’s Eric Mok (C Event Champion) who won 3-1 against Jesmond’s fast improving Max Forster, and to Wayne Hollywood, who worked hard for a D Final win over Connor Lawless, which went right to the wire before being settled 11-9 in the fifth.

Another 5-set marathon in the D Plate went the way of Mark Knott, who finished with an 11-9 win over the fast-improving Fiona Macfarlane of Tynemouth.

Continuing the theme of players getting their money’s worth, Oliver Preston and Northern junior Andrew Shipley played out a 3-2 in the C Plate final, with the former triumphing 11-8 in the deciding game.

And the scoreline in the B Plate final was, you guessed it, 3-2 – another coin-tosser this, with Simon Long edging it 11-9 in the fifth over Consett’s Matthew Youngman.

Arguably the best final of the lot, though, came between the No 1 and 2 seed in a very strong B Event draw. Neither winner Michael Collins nor runner-up Dan Wareing would have been out of place in the top event, and they both showed their class in a superb match.

Jesmond junior Wareing battled back from 9-5 down in the fifth and was matchball up when he just failed to connect with a forehand volley kill chance at full stretch at 11-10. Collins, though, stayed positive and went on the attack in the last few points to clinch a brilliant match 14-12, and leave a tired Wareing cursing his decision to go out on the hoy with Messrs Gutcher, Younger and Pearce the night before.

Yes, it’s certainly tough at the top of Northumbria Squash these days, not to mention on the dancefloor at the Riverside . . . 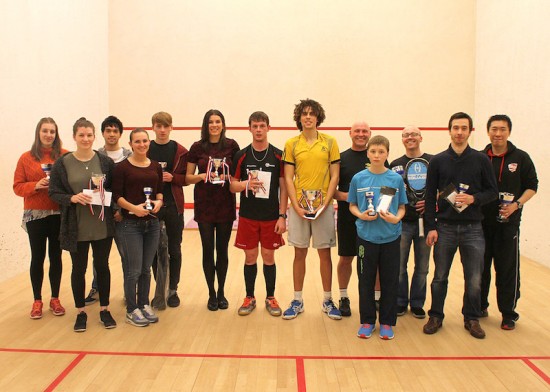