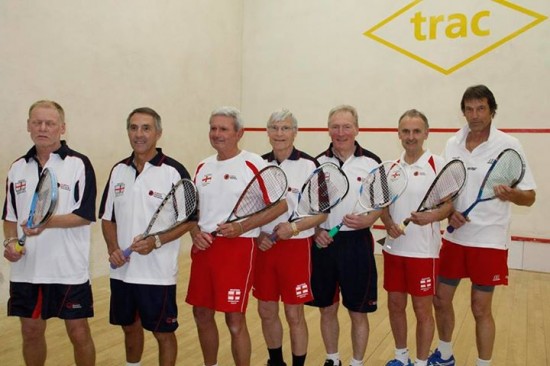 NEWCASTLE squash hotshot Derek Collins has helped England to a glorious win in the Over 65s Home Internationals tournament.

Collins, of Northern Squash Club in Gosforth, won the crucial match against Scottish No 1 Jim Dougal (9-3, 9-4, 10-8) to turn a 2-0 lead into an unassailable 3-0 advantage in the final match of the round-robin event in Aberdeen on May 22-24.

England had seen off Ireland (4-1) and Wales (5-0) in their first two matches, and his team-mates completed the whitewash over hosts Scotland to cap a convincing tournament for the southern invaders.

Playing No 1 for his country was the bonus prize for the 65-year-old, who bagged a prestigious British Open title in Hull only a week earlier.

Collins beat off all-comers at the Open masters to clinch the coveted Over-65 title, which has long been held as the unofficial world championships of squash.

Collins – a pocket rocket who plays a fast, dynamic game despite his so-called veteran status, saw off current England skipper (and No 2 seed) Barry Featherstone 3-1 in the final, despite losing the first after a nervy opening.

A nail-biting 10-8 win in the second game (from 8-4 and game-ball down) proved the turning point, with the third and fourth game going 9-0 and 9-6 to our local hero.

“I’ve got to thank my long-term friend and coach Nigel Hissey,” said an understandably delighted Collins, who narrowly lost the British Closed Championships final in Manchester in February.

“I’ve fallen at the final hurdle in these sort of events a few times since 2006 but he never lost faith in me. It was a hard match, but the last few points were over in a flash and it took a while for it to sink in that I’d actually won it.”

Congratulations also go to three runners-up from the North East at the British Open Masters – Jon Evans of Tynemouth (Men’s O55), Yarm’s Andy Cross (Men’s O45) and Gareth Lumsden of Sunderland and Bannatyne’s (Durham) Squash Club, who reached the final of the Over 35s before being edged out by Darren Lewis. 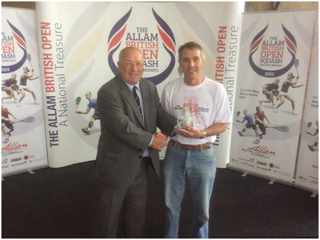