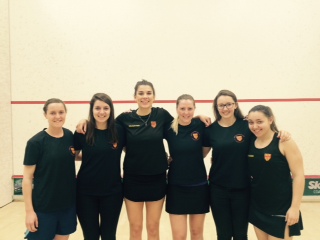 So you’d think Essex would have been a tough match? We were missing our numbers one and four. Lucy was off caring about her future and Sarah unfortunately injured. However we needn’t have worried.

Hannah got us off to a great start, the first game was close but after that she cruised to victory, 3-0.

Maria was up next and despite her crippling arachnophobia triggered by the presence of Aragog in the corner, she too managed to win 3-0.

Kim had a tough game against a girl adorned with England kit. Kim went 2-0 down quickly, but that was always part of the plan. She won the next 3 quickly and destroyed her opponent 11-2 in the 5th and final game.

Next up was Emma, she too started slow going 1 down (as usual) but after an intense debate after the 2nd as to whether to continue with the lob serve or employ a lower more aggressive alternative, things quickly got better. Upon deciding to go with a combination of the two the next 2 games were quickly wrapped up and we had another victory.

All in all a good start against Essex, up next Surrey.

Up first was Sam, knowing she’d be opening the second match she decided to forgo 2 sides at Nandos. Turns out the sacrifice was worth it. Sam’s seasoned opponent had a few tricky shots up her sleeve but they were no match. Sam stormed to a 3-0 victory.

On next was Lucy, playing the 1st of Surrey’s Egyptian players. Was an incredibly close game with Lucy going 2 down, Lucy managed to pull one back and a couple of dodgy decisions in the 4th cost her the game. While victory on the court was elusive, she did manage to out sass her marker with a perfectly executed eye roll.
This was all before having to go and apologise to the marker she angered the previous week with a choice remark that is definitely not suitable for for repetition on the Northumbria Squash website. Honestly Lucy.

Emma stepped up next, up against Lucy’s opponents younger sister, she stormed to a relatively easy 3-1 victory with only a slight one game blip. This however can be put down to the fact Emma faced not one but two opponents on that court…Aragog had decided to make a reappearance.

Hannah went next, with little fuss she disposed of her own opponent, an easy 3-0 victory.

Kim closed the match. Once again with her opponent adorned in England kit Kim saw red. Crushing victories in the first 2 games took Kim 2-0 up. Despite Kim’s pre game promise of theatrics, all the drama went on off court, with Sam being shooed from the spectators area for being ‘too rowdy’ being told by the England Squash ref that ‘the game will not continue until you have vacated the area’.
With Sam safely out the way the game recommenced, with Kim’s opponent fighting back to take the games to 2-2. Kim, however, conscious of 1 key fact in the final game, that food was nearly ready and we still hadn’t showered, was quick to finish and she left with a fantastic 3-2 victory.

When the final came, we knew it was gonna be an uphill struggle. The Yorkshire team had come from a good nights sleep. We on the other hand despite having a 3 drink limit had been out until 2 before returning to a premier inn which can only be described as the setting of every horror film ever made.

Emma was up first, playing what looked like her 15 year old self, also ironically named Emma. The younger version stood no chance and was swept aside quickly and efficiently. Emma proving once again youth is no match for experience.

Sam was up next. Having already expressed regret at her decision to apply an additional supplement to her breakfast sandwich Sam was not feeling her usually sprightly self. Despite this the game was closely fought, unfortunately her opponents combination of a good nights rest and an oatmeal breakfast won out.

With the games 1-1. Lucy was on next. Up against one of Yorkshires pro players, Lucy played well but unfortunately 100hrs of training a week won out. Once again despite losing the match, Lucy won a more important victory, this time it was who looked best on court.

Another battle of the names followed, with Hannah playing her Yorkshire alter-ego. A rocky start with a game each proved a slight scare but in the end, Hannah 1’s steely composure won out and she polished the floor in the next 2 games.

With the games 2-2, the pressure was on our resident squash court diva, Kimberly Hay.
Kim was not up against any normal opponent and instead faced a semi-professional flown in from South Africa. Rumours of her use of traditional African voodoo rituals to improve her playing abilities meant we knew victory would be a tall order. Despite being crippled by two 5 set games the previous day Kim did well to stick in for 3 close games but unfortunately her opponent proved too fresh.

In the end, we lost in a closely fought final. 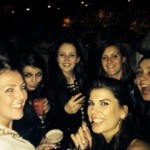 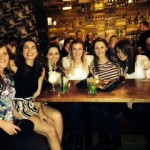 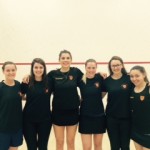 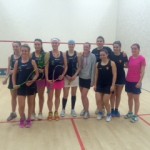 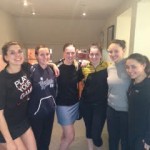 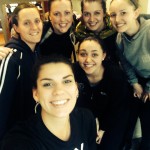