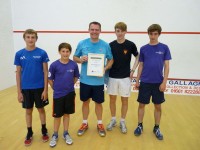 We have now reached the half-way stage of the Summer leagues with most teams playing 4 or 5 games. The number of matches decided by count back on points won is only 2 out of 38 games posted with 2 results still outstanding showing that playing with a 4 person team against a 5 person team doesn’t seem to make that much difference.

Division A:
Eldon Leisure Destroyers are out in front with the Northumberland Ninjas in second place. The Destroyers having played two more games than the Ninjas, but the Ninjas are still unbeaten and they did beat the Destroyers convincingly in the first game of the season. Walker and Dunston A are propping up the division but still competing and enjoying their games.

Division B:
Newbiggin, Sunderland Greens and Newcastle University Staff are out in front in this division. The NU Staff having just defeated Newbiggin on points won and still have to play the Greens making the race for the play-offs interesting. Northern Nickoids and Northern SquashBucklers are finding life tough at the bottom of the division.

Play-Offs:
All fixtures must be completed by Saturday the 26th of July.
The play-offs are scheduled for the weekend of the 1st and 2nd of August at Tynemouth SRC. The winners and runners-up from each division will play-off on Saturday to decide who faces each other for the Northumbria Summer Leagues 2015 title on Sunday. The losing teams will play-off to decide 3rd and 4th placings also on Sunday.