Tynemouth tornado blows them away!

TYNEMOUTH tyro Sam Evans tore through the field to finish top of the Dunlop Challenge Series in May.

The fast-improving Evans finished top of a bumper pile of 150 boys and girls who have been battling it out in the nine monthly junior leagues since last September.

Evans picked up a brand new racket for his efforts, as did Northern duo Megan Freeman and Sophie Freeman who also finished top of their respective leagues.

Sponsors Dunlop handed over prizes to the top 12 players – and, going into the final weekend of the season, there were still 25 players in the mix!

They were followed closely by Lennox Lockwood (Tynemouth , Ewan Strathdee (Northern) and Niamh Barclay (Consett) who picked up enough points to fill the next three places and win Dunlop squash bags.

There was an almighty scramble for the last six prize places and the juniors who managed to squeeze in ahead of the pack and win Dunlop squash goggles were Sophie Curtis (Hexham , Luca Baldasera (Northern) , Abigail Bedford (Northern) , Leighton Adamson (Newbiggin), Harriet Wight (Northern) and Sam Sweeney (Primrose).

“Dunlop’s support of these events is helping junior squash in the North East to go from strength to strength,” he said. “And we look forward to keeping that going by getting even more involved when the new season starts in September.” 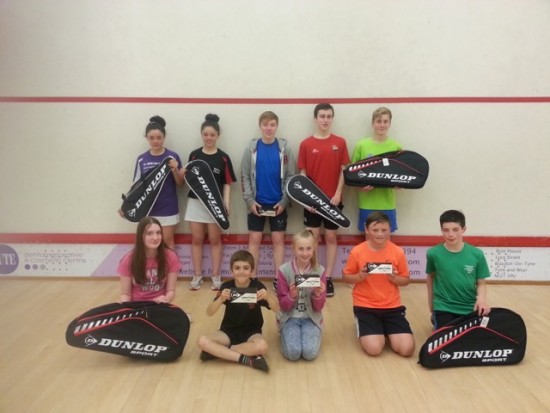