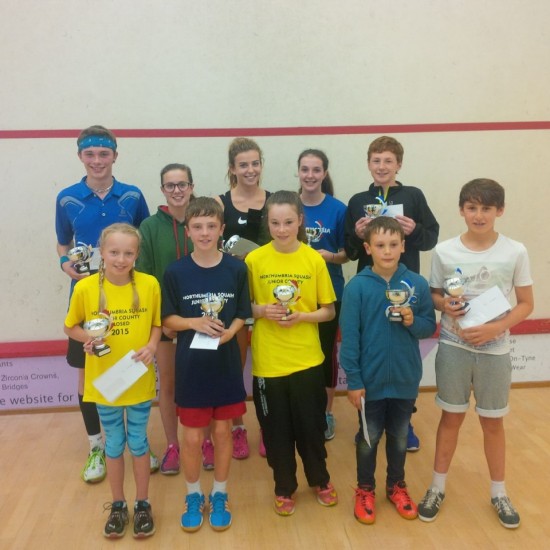 The 17-year-old lifted the Boys Under 19 trophy after a commanding 3-1 win over Alnwick’s Chris Wiggins in front of a packed crowd at Jesmond’s Northumberland Club.

Wiggins – who also plays and trains at Jesmond – powered back from 1-0 down to level with an immaculate second-game display – but Todd’s energy and pace proved too much in the end.

Home favourite Georgia Webster took the Girls U19 title in the event, sponsored by DB Glaziers. She beat Northern’s Tegan Younger 3-1 in what was effectively the final of the round robin event; Ellie Watling, also of Northern, finished third.

The Gosforth club were again to the fore in the Boys U17 event, with Michael Mattimore – having already clinched third place in the U19 event, proving top dog.

The former England U11 international has been on a hot streak of form lately, and proved too much in the final, triumphing 3-0 despite a sterling effort from the runner-up, Jesmond’s Ben Waugh.

Tynemouth’s Matthew Carr edged home ahead of clubmate Sam Evans (11-9 in the fifth) to finish third, while Tom Cornell (Northern) won the plate ahead of Ross Truman.

The Girls U17 final was a real humdinger and arguably the match of the day – two very closely-matched players in Jesmond’s Laura Neill and Northern’s Josie Barker.

The latter took the first 11-9 then lost the second 11-13; games three and four were also shared, but Barker held her nerve to edge home 11-8 in a nail-biting fifth and take the match 3-2.

No less than 15 girls contested the Under 15 compeition – showing that girls squash in the region is going from strength to strength.

Northern dynamo Megan Evans was edged out 3-1 by Lowri Waugh of Northumberland Club in an all-action finale. Evans lost the first two 11-9, then hit back with a 12-10 win in the third, only to run out of steam in the next, with Waugh taking it 11-7.

The Boys U13 final couldn’t have been closer – Northern’s Matthew Thompson taking the tie-breaker in the fifth for an epic 3-2 victory over Tynemouth’s Dan Neill.

Tynemouth’s Tom Walsh was third ahead of John Thompson, while Northern’s Milan Stach took the Plate ahead of Kieron Mahoney.

At Girls U13, another marathon match was settled 11-9 in the fifth; this time Katie Merlane (Northern) was the victor, with Beth Dean (Northumberland Club) taking the runners-up trophy. Katie Barker was third ahead of Annie Anderson, while Westoe’s Eve Hardie and Rebecca Grogan finished first and second in the Plate event.

The Boys U11 event – featuring 22 pocket dynamos – could have been a tournament weekend in itself. Jesmond’s Ollie Forster scrapped his way to a worthy win over Calum Howie in the final.

Will Johnson took the 3/4 play-off 3-1 over Hugo Fletcher, while Charlie Took beat Angus Dean 3-1 in the Plate final.

Willow Morris of Jesmond was commanding in the Girls U11 final – she took it 11/6, 11/5, 11/2 against Annabelle Stow. Zoe Shipley beat Grace Moore to third spot, while Amelia Sherlock made it look elementary against a fast-improving Lettice Lamb in the plate final.

And in the Mixed U9 ‘Stars of the Future’ event, home favourite Patrick Mallen saw off strong competition from Ethan Brown (Tynemouth) and Northern’s Jude Bedford, who finished second and third respectively in a hotly-contested round robin event. 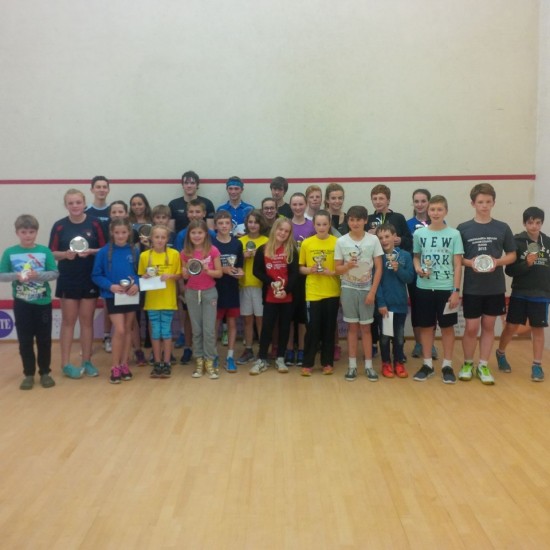 All the winners and runners-up 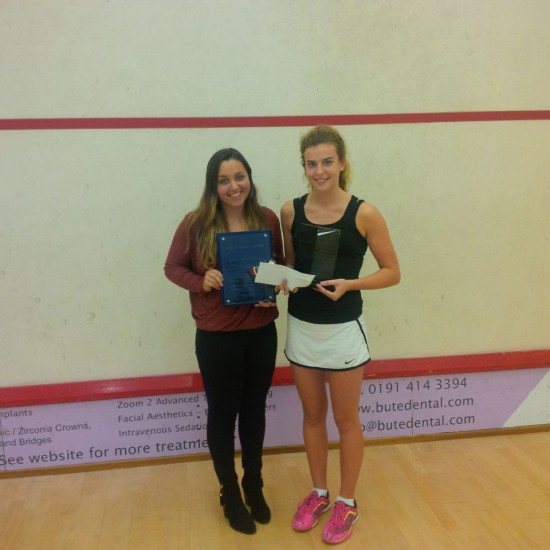 Lucy Beecroft and Josie Barker with their trophies