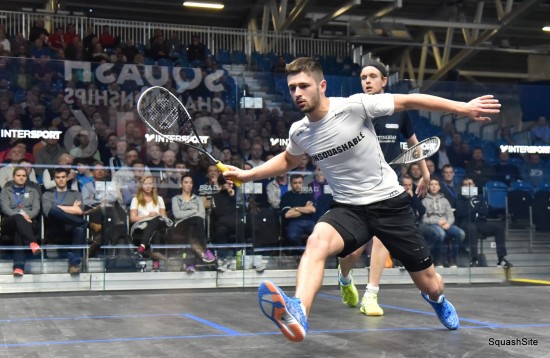 THE richest event on the North East squash calendar is back with a bang this March . . .

The Northumbria Open – now in its fifth year – attracts professionals from around the country and beyond – and with a prize fund worth $5000 (FIVE times last year’s total), the entry list is jam-packed with talent.

Sanctioned by the PSA (Professional Squash Association) there will be precious world ranking points up for grabs at Jesmond’s Northumberland Club between March 4 and March 6, in a tournament supported by main sponsor, North East financial services firm True Potential.

Entry is free so North East squash fans are in for a treat with no fewer than 11 top-200 players on display in the main draw.

Top seed is former England Under 19 No 1 George Parker (World Ranking 78). The Leicestershire firebrand – an England youth international – is starting to make a real impact on the senior tour, and recently took a game from former World No 1 James Willstrop at the National Championshps in Manchester.

Reigning Northumbria Open champ Joel Hinds is two seed – the 28-year-old from Derbyshire is currently ranked 84 in the world and earned many fans with his upbeat approach and stylish play at Jesmond last year.

Other players to watch out for are 22-year-old Scottish No 3 Dougie Kempsell, and upcoming English youngsters Joe Green (Watford) and Patrick Rooney (St Helen’s).

International flavour is provided by Finnish world No 135 Jaakko Vahamaa and Tristan Eysele from South Africa.

Main event qualifiers start on Tuesday March 1st, with the main tournament and the graded events for other North East players kicking off Friday March 4th.

Closing date for entry to the graded events is February 25 – the fee of £15 includes a tournament T-shirt – and entries can be made by email to: northumbriaopen2016@gmail.com 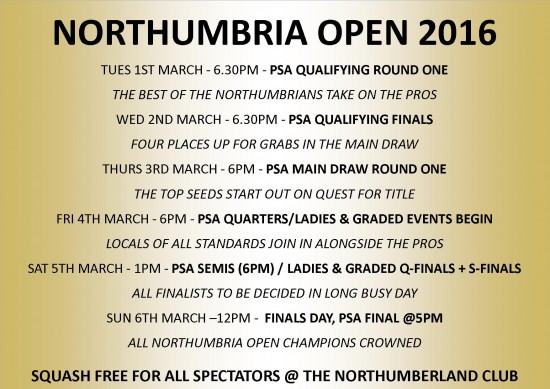