Over 55s so close to National Title

For the third year in succession the Men’s Over 55s reached the National Inter-County Finals weekend, this time held at Leicester on 19/20 March 2016. Having finished runners-up in our Premier Division Stage 1 group earlier in the season, as last year we faced holders Middlesex (national champions for the last six years) in the semi-final, with the winners due to play Lancashire (victors over Surrey) in the final.

The Northumbria squad was strengthened by the introduction of local legend Bryan “New Hip” Beeson (Chester-le-Street) at no 2 behind Jon “Hip Hop” Evans (Tynemouth), with Glenn “Nothing Up My Sleeve” Ward (Tynemouth) at no 3 also making his first appearance in the Finals weekend. Ron “65% Improved” Freeman (Ashington) came back in at no 4 after his stint, or stent, on the sidelines, and Andrew “Laces Undone” Wilkinson (Hexham) secured the no 5 spot with John “Odd Job” Thompson (Tynemouth) as captain / reserve / chauffeur / reporter / agony aunt.
In Saturday’s semi final against Middlesex, we amazed onlookers by cruising to a 5-0 victory with 3-0 wins for Glenn, Ron and Bryan, a solid 3-1 win for Andrew and a battling 3-2 win in 51 minutes for Jon who in the process unfortunately aggravated a familiar hip problem. Glenn comfortably dispatched National Over 60 finalist Duleep Adhihetty, Ron was delighted to beat England international Stuart Hardy for the loss of 3 points in only 12 minutes (or was it 13?), and Bryan saw off National Over 60 champion Mark Cowley with ease.

In the other semi-final played earlier, Lancashire had overcome Surrey 3-2, losing at 1 and 2 but possessing the strength in depth to win at 3/4/5.

After a quiet evening’s entertainment from the resident magician, we arrived for Sunday’s final against Lancashire expecting to find it tough at 3/4/5, and so it proved. Andrew having lost the first game 9-0 came back to lead 2-1 and got to within two points of clinching a famous victory but eventually went down 3-2. Glenn seemed to have used all his jokers the night before but battled through a titanic match to win 3-2 and put us back in contention, however Ron couldn’t repeat his sparkling semi-final form and unfortunately went down 3-0. 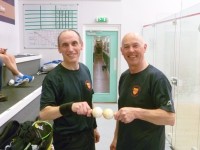 The big question was Jon’s fitness. He had easily beaten his opponent Peter Upton in the group stage earlier in the season, but this time after starting well to win the first game and lead in the second, his injury problems unfortunately resurfaced. Peter clawed the second game back and then took the third. Not even Ron’s famous massage technique nor Glenn’s rabbit out of a hat could cure Jon during the interval between games, and with the aid of some questionable refereeing decisions Peter clinched a very tight fourth game to win the match 3-1 and secure the title for Lancashire. Bryan was left to play the ‘dead rubber’, running out an easy 3-0 winner to make the final match score 3-2 in Lancashire’s favour.

So after all our efforts to ensure Middlesex were deprived of the trophy, Lancashire snatched it away from us by the narrowest of margins. This was our closest attempt yet to bring home the National Title, and a great effort by all involved. Surely there’s every chance of this squad – when fully fit – going on to win the title next season.