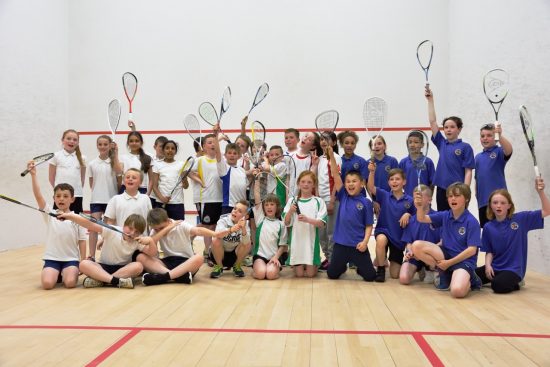 ALL WINNERS: players from the three Gosforth Middle Schools

East Middle have always won this hotly-contested event, but Central were determined to break that run this year – and so they did, pipping the third school team, Gosforth Junior Academy, by just one point in the final.

The event, rounding up the school season ended recently with those two schools and Gosforth Junior Academy competing for the cup.

The tournament is the culmination of nine months of outreach work into the local middle schools at Year Five by Northern’s squash coaches, Liam Gutcher , Matt Hardy, Alex Robertson and Richard Vitty. The coaches deliver 4 weeks of PE lessons at each school based around hand/eye co-ordination and then invite the best prospects back to Northern to learn how to play squash and represent their class in an inter class competition.

The best 6 boys and 3 girls from each school are then invited to represent their school in the Gosforth Middle School Cup. Many of the children that have been shown squash during this process have now joined the club and it’s coaching programme, thus helping to secure Gosforth’s reputation for school squash.