Kids On The Glory Trail Again! 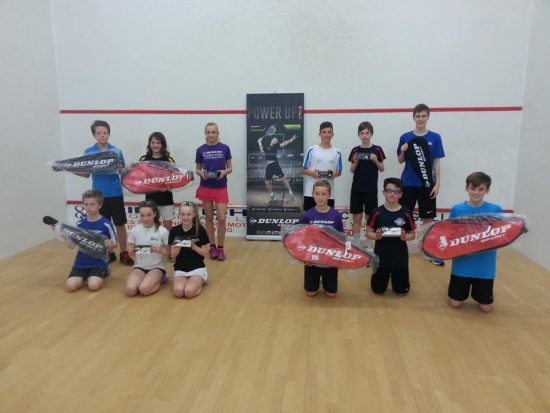 THE COUNTY’S junior squash scene is thriving – with young players from Northern and Tynemouth dominating the top prizes in the Dunlop Challenge Series.

The season-long event reached a pulsating at Tynemouth Squash Club with a host of prizes up for grabs, courtesy of sponsors Dunlop.

The top three players in the rankings all picked up a brand new racket – Northern’s Adam Forster and Consett’s Bailey Hodge had already bagged the top-two spots ahead of the final weekend.

Northern’s Alfie Turpin needed just one point from the final event to stay in third spot – and he did more than enough, winning his league to win that third and final racket.

The Dunlop challenge is a series of nine events held at Tynemouth, Jesmond and Eldon Square , where over 150 juniors from all across the region pick up bonus points during each event which accumulate to put the best players in the running for prizes at the end of the season.

Players 4 to 6 in the rankings all picked up Dunlop Squash bags and for this season it was all Northern juniors bagging the prizes with Joe Clements, Joe Elliott and Rebecca Grogan all fighting hard to earn their prize-winning places.

It was a scramble for points to try and get into the next six places and win a pair of Dunlop goggles. A good performance on the last day could take a player into a prize-winning berth. This proved to be the case for sprint-finishers Lewis Cruz (Tynemouth), Katie Merlane (Northern) and Nathaniel Bell (Tynemouth), who all won their respective leagues to get an extra three bonus points and join Northern trio Harriet Wight, Kieran Mahoney and Abigail Bedford who were already in the prize positions.

“These events are a great way of introducing young and inexperienced juniors to competitive squash,” said organiser Ray Rycroft – head coach at Tynemouth. “With Dunlop`s help junior squash is thriving in this area.”

Anyone wanting further information about getting involved in these events can contact Richard Vitty on 0191 2859712.