FIVE OUT OF EIGHT FOR NORTHUMBRIA JUNIORS

The first stage of this year’s Junior Inter-County Championship took place over the 15th and 16th October with Northumbria having teams in all eight competitions. Five of the eight teams progressed in the main competition and will play for a place in the finals weekend while the other three will now be entered in a plate competition. 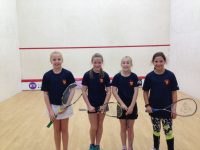 Our girls U13 team included three debutantes in the form of Annabelle Satow, Emily King and Talia Tiryaki along with County Champion Katie Barker. Despite a home advantage at the Northumberland Club the girls were a new team in a very tough group. They lost heavily to Yorkshire 2nd and Warwickshire 1 but came so close to beating Lancashire with Katie winning 3-0 but Talia and Annabelle both losing 3-2. This was no doubt a great experience for the girls though and they’ll no doubt feature in many Northumbria teams in the future. Let’s train hard and go and win the plate girls!

The boys U13 team were possibly the most dominant of all our teams during the weekend only dropping a total of seven individual games over fifteen matches, quite an achievement! Tom Walsh, Sam Sweeney, Milan Stach, Ollie Forster, Archie Hutchinson and Calum Howie finished miles ahead at the top of their group containing Lancashire, Durham and Cleveland and Cheshire. Our captain Jen Stach said, ‘they’ve behaved beautifully, I’m so proud of them all!’ something that seems to be echoed across all of our teams.

The girls U15 team were all ready and set to go on the Friday night only to be told that two teams had pulled out of their group meaning they had automatically qualified. We had no doubt though that our team of Harriet Wight, Beth Tudor, Lucy Anderson, Katie Merlane, Beth Dean and Anna Moore would have done the business if they had played! Possibly the quickest victory in County history, the girls will progress to the next round of the main competition. 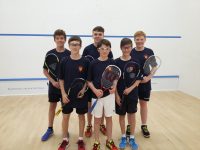 The boys U15 team had a similar situation with Merseyside pulling out before they travelled to Harrogate to play the remaining teams of Yorkshire and Lancashire. County regulars Nathan Dobson, Matthew Thompson, Sam Aiston, John Thompson were joined by new boys Kieran Mahoney and George Frewing to take on Stage 1. A comfortable victory against Lancashire was followed by a hard fought win against the mighty Yorkshire with Matthew Thompson holding his nerve to seal the deal. Captain for the day Peter Thompson said, ‘it was really tense at the end but the lads played really well.’ See you in the next round boys!

The girls U17 team had the unenviable task of travelling all the way to Lincolnshire but the withdrawal of one of the teams competing meant a later start, phew! Lead by captain Lesley Vitty our team included Martha Spalding, Lowri Waugh, Erin Vitty, Emma Delgaty, Aanya Hamilton and Megan Freeman. The girls were met by a very strong Yorkshire side who dominated the group, beating our girls comfortably but we sealed our place in the next stage with a 4-1 win over the hosts Lincolnshire. Great work girls! 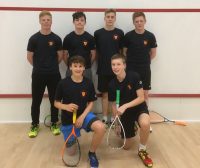 Our boys U17 team headed across the country to Carlisle who were hosting Stage 1 between Cumbria, Northumbria, Yorkshire and Durham and Cleveland. This was possibly the tightest contest over all the age groups with not much in it between any of the teams. Max Forster who recently won the coveted John Dale Trophy lead out a formidable team including Matthew Carr, Andrew Shipley, Tom Cornell, Matthew Walsh and Lennox Lockwood. A close 3-2 loss against a Yorkshire team including British Champion Sam Todd was followed by a 4-1 win against Durham and Cleveland. It came down to the final match against Cumbria to see which team would progress and Northumbria nicked it in a nail biting 3-2. Dave Shipley the team manager said. ‘Some fabulous squash played today and super proud to be part of the team, they’re a good bunch of kids.’ Well battled lads, keep pushing! 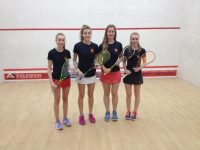 Our girls U19 team of Josie Barker, Amy Rowell, Tegan Younger and Amy Rowell was captained by Josie’s dad Tim Barker and they headed down to Pontefract to take on Yorkshire and North Wales. The first match versus Yorkshire saw Northumbria beaten comfortably but in the second match the team just couldn’t get over the line against a strong North Wales team. Tough luck girls, the plate it is! 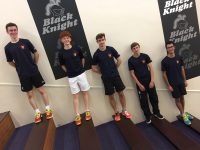 Northumbria boys U19 team were the hosts at Tynemouth Squash Club with Yorkshire, Durham and Cleveland and Lancashire travelling up to our coastline. The boys had it tough from the start with our top three players unable to play against some tough opposition. County veteran Jon Evans captained a team of Tom Wight, Ben Waugh, Sam Evans, Angus Forster and Cameron Hamilton with only one U19 cap between them all. Unfortunately we lost out in all three matches but each one was 3-2, representative of the hard graft all the players put in. A special mention should go to Cameron who was unbeaten all day which I’m sure is a stat he will be proud of.

A massive thank you to everyone who helped out at the weekend: our team captains, other supporting parents who travelled, our host venues the Northumberland Club and Tynemouth Squash Club who were fantastically accommodating and welcoming and finally the players who again have played their hearts out and conducted themselves immaculately in the process.

Stage 2 will be taking place on the 19th and 20th November with teams being organised and picked a couple of weeks before then. Let’s see how many teams we can get into the finals weekend, COME ON NORTHUMBRIA!!