Under 15 is the GOLDEN AGE for Northumbria!! 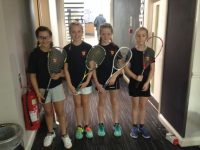 First up were the girls under 13s playing for the trophy finals, who just managed to get to Warwickshire after captains Paul and Tim made a pigs ear of the directions! The team was the same as in Stage 1 made up of Northern’s Katie Barker and Talia Tiryaki, Tynemouth’s Emily King and Hexham’s Annabelle Satow. They got off to a flying start beating Warwickshire 2nds and continued their form all the way through the day beating Lancashire and Worcestershire to make it to the Trophy Finals. Vice captain Tim Barker said, ‘the girls who were great fun and displayed effort and tenacity as well as some skill!’ 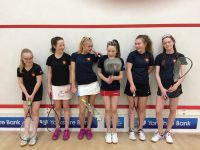 The girls under 15 team were away in Yorkshire for a place in the main event finals and had to finish in the top two in a group with Yorkshire and Cambridgeshire to progress. The team included Northern’s Megan Evans, Harriet Wight, Beth Tudor, Lucy Anderson and Katie Merlane along with Jesmond’s Beth Dean. Despite fantastic performances against Yorkshire the team went down 4-1 but a 4-1 win over Cambridgeshire meant the girls went through, much to captain Marianne Anderson’s delight, ‘they played fantastic squash and were always there to support each other.’

The girls under 17 team had the same long journey to Warwickshire that the girls under 13’s had. Playing for a place in the main event finals, Jesmond’s Martha Spalding and Lowri Waugh made the team along with Northern’s Erin Vitty, Emma Delegaty, Aanya Hamilton and Megan Freeman. County squash veteran Lesley Vitty had the job of getting the girls out of bed in the morning at the hotel, no easy job! The girls had a tough loss to Yorkshire in the morning with only Aanya getting a game in her match but fought so hard to beat Buckinghamshire 3-2 in the next one, Lowri holding her nerve to win the deciding rubber. But unfortunately it wasn’t to be as the team lost to a strong Warwickshire who beat them 5-0. Hard luck girls! 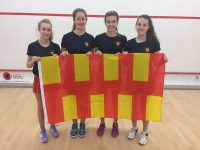 Stage 2 of the girls under 19 team heralded the end of an era with junior county stalwarts Georgia Webster and Tegan Younger playing their final games for Northumbria, thanks for all your efforts girls, you will be missed! Along with Josie Barker and Amy Rowell the team were in a group with North Wales, usual rivals Yorkshire and Cambridgeshire playing for a place in the main event finals. Unfortunately the day didn’t go to plan as they were beaten by all of the other three teams, with Yorkshire and North Wales coming out on top. 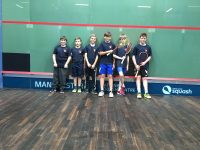 The boys under 13 team had been in lethal form during stage 1 only losing two single matches throughout the entire day, so our hopes were high heading into stage 2 in the main event. The same team headed down to Manchester: Northern’s Milan Stach and Archie Hutchinson, Jesmond’s Calum Howie and Ollie Forster, Primrose’s Sam Sweeney and Tynemouth’s Tom Walsh. The team were up against Lancashire, Leinster and North Wales all of them turning out to be stronger than expected! Despite performing brilliantly the whole day the boys were only able to come away with a hard fought win against Lancashire. In the deciding rubber Archie turned his ankle at 9-5 up in the 4th but team medic Jason Sweeney was on hand to pick him up, give his ankle some magic freeze spray and inspire him to play on and win to the delight of the team!! Although finishing 3rd and being knocked out of the competition Jason said, ‘a few performances stuck out like Ollie’s against Ireland and Sam’s against Wales but all the boys played with a brilliant attitude.’ Sounds like they’ve had a blast, great to hear! 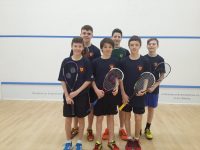 In a similar situation to the boys under 13s, the boys under 15 team had finished top of their group in stage 1 and were looking for a place in the finals. They travelled back to Harrogate with an even stronger team featuring Tynemouth’s Nathan Dobson, Jesmond’s Harry Little, Sam Aiston and Matthew Dyter and Northern’s Thompson twins Matthew and John. In their group: North Wales, Cheshire and Yorkshire. The team’s strength was shown against Yorkshire and Cheshire where they overpowered their opponents at nearly all the seedings and then their depth came into play against North Wales, winning at 3,4 and 5 to seal a place in the finals as group winners! Team manager Peter Thompson commented, ‘the boys U15s put in a great team performance to qualify for the finals. They all encouraged each other throughout the day, before and during games. Our strength in depth was invaluable which helped us come out on top against some good teams.’ Awesome work lads, get practising for January, you can do it! 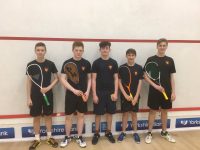 After a massive battle in Carlisle the boys under 17 team had fought through to stage 2 of the main event. Two matches awaited, one against familiar foes Yorkshire, the other against a highly rated Cheshire side. Our team lined up with Jesmond’s Max Forster and Matthew Carr, Northern’s Andrew Shipley and Tynemouth’s Matthew Walsh and Lennox Lockwood. Unfortunately it wasn’t to be as Yorkshire’s top end were too strong for our lads beating us 4-1 and Cheshire pipped us to the post, winning 3-2. Team manager David Shipley has been nothing but complimentary about this year’s under 17 team summarising, ‘the team showed total commitment and were great. It was always going to be tough today.’ Well done team, you’ve taken some scalps on the way and made them fight for every point!

Unfortunately the boys under 19s were unable to field a team to compete in stage 2.