IF there was a North East junior version of Sports Personality of the Year, then surely Jesmond’s squash starlet Max Forster would be on the shortlist.

Forster has rounded off an incredible year – by winning the British Junior Championships.

The tenacious teenager took the Under 15 honours at Manchester – coming just weeks after he lifted the coveted John Dale trophy back in the North East AND completed a double trophy haul at the Northumberland County Junior Championships.

Forster – who does not turn 15 until the end of November – won his first three best-of-five matches without dropping a single game.

But he was up against it in the semi-final – facing England No 1 Sam Todd – a player he had never beaten before.

Pontefract’s Todd seemed on his way to another victory when he had three match balls at 2-1 and 10-7 up – but Forster’s never-say-die attitude kicked in and he clinched that fourth game to force a decider, coming through 3-2 to book his place in the final.

It was an all-Northern affair in that match as third seed Forster faced Cumbria’s Adam Goad; and the No 4 seed showed he was on form as he took the first game fairly comfortably at 11-6.

Working his opponent around the court, Forster kept the pressure on his opponent and finally clinched the match with a powerful volley to bring his first ever British Junior Championship trophy back home to Tyneside.

“Max was relentless in the final – he played a very mature and controlled game,” said his coach and Northumbria County Squash Chairman Dave Barnett.

“This is an amazing achievement for him and testament to all the hard work he has put into his game over many years now.”

Forster had beaten Suffolk duo Kian Howard and Josh Perkins, and his sparring partner at Jesmond’s Northumberland Club, Harry Little, in the early rounds at Manchester.

This victory caps an incredible 12 months for a player who is rapidly becoming one of the most promising youngsters in the country.

Forster was awarded the John Dale trophy in October – presented to the Northumbria junior who has contributed most to the game over the previous 12 months.

And he also lifted the Under 15 AND Under 17 trophies at the County Championships, without dropping a game on home turf at the Northumberland Club, Jesmond. 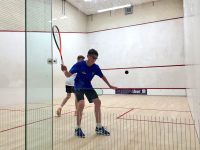 FORSTER FOCUS: The Jesmond starlet in action during his victorious final match.