Howdy squash pardners. Hey I was at Wigan on Saturday the 14th of January watching our local lads in the Stage 2 O-55’s County competition. There were 3 teams, called Lankashire and Wustashire and us, Northumbrialand.

Our squad was Bryan Beeston, Jonathon Evans, Ward Glen, Ron Freebird and Peter Slaughtered. As I mentioned in my Stage 1 report in October, I know all the lads very well and consider them close friends, and as soon as they start speaking to me again, we’ll have a laugh n that. In fact here they are, look:

1st match vs. Lankashire – Time of Squash Off – 11 a.m.
This was a repeat of last years Final, which Lankashire won by one point – so our lads were out for revenge. Playing in the 5-3-1-4-2-2-3-2-4-1 order, Ward and Slaughtered were on 1st.
Ward’s opponent was the bloke he played in last years final, in which Ward won 3-2. Ward started like he usually finishes – slow, and quickly went 11-1 down in the 1st game, which not surprisingly he lost, like, – easily. He got better though simply cos he couldn’t get any worse, and finally won 15-13 in the 5th. A great start for Northumbrialand – 1-0. On the other court, Slaughtered was also having a battle. He went 2-0 down but then started hitting the “Bahl Doon The Wahl” as he says, and fought back to win the 3rd and make it 2-1. A tense 4th game though eventually went 20 – 18 to Lanks. Peter said he “Didn’t knaa” what happened in that 4th game, we think he said. We just smiled as if we understood or had wind. Match now at 1-all each. Bryan was next up, playing the Lanks’s tricky No.1 Peter Upton. Not as tricky as our Beeston though as he drove home a convincing 3-0 win in typical ‘Hammer of Beeston’ style. Get to the back, ball – now! Match 2-1 to Northumbrialand. Freebird was on the other court playing Ian Bradburn – a real crafty old fox. Despite being 96 and now simply playing as a hologram, he was too crafty for Freebird who was ‘boasted’ off court in 3 games. Next time we promised Freebird we’ll let play him on a court without any sidewalls. Match at 2 all each. Evans went on court last with the whole match hanging on his game. An inspired opponent Steve Johnson played out of his skin and he took Jon to 2-2. A nail-biting 5th ensued (good word, means carried on], including both players tumbling to the ground in some sort of squash over 55’s mating ritual, and also Johnson holding a match ball. But Evans made him put that match ball down, and held his nerve taking the last game 16-14 and the match to Northumbrialand 3-2!

Pure excitement! Brilliant. Lets have some ginger beer and chapsticks.

2nd match vs. Wustershire – Time of Squash Off – 2 p.m.
Again Ward and Slaughtered were on 1st after a quick lunch of Haribo toast. Ward’s opponent wasn’t quite ready for his low end Primark quality squash as he raced to an 11-1 lead. He quickly caught on tho, and pushed the game all the way to 18-16 to Ward, who then continued his Bargain Basement squash and ran out a 3-0 winner. Match at 1-0. On the other court, Slaughtered lost the 1st game cos he didn’t win it, but determined to get his County 55’s win, then proceeded to take the next 3 games – and the match 3-1! Well Done Peter, and whatever you said afterwards mate – yes! Match at 2-0. Bryan was up next against John Parks, and we didn’t know was that he’d brought with him in his bum-bag one of his a vintage 1989 performances – and on 12 inch coloured vinyl as well. After winning the 1st game 15-7, he unleashed a barrage of Turbo charged drives of power similar to the Vauxhall Viva he had in 1989 when he had that mullet thing going on – taking it 15-1 ! Parks never recovered from this onslaught and Bryan came out a 3-0 winner. We had Bryan drugs tested straight after the match, but all we found were 3 jelly babies, traces of left handed resin pad and the last bit of some Old Spice soap on a rope. Match now 3-0. Desperate to get a win, Ronnie went into full Bird flight, hitting an array of volley winners and drops that his opponent couldn’t handle. And so once again thankfully for our long journey home – the Birdman had his win and we all breathed a little easier. Da Do Ron Ron Ron, Da Do Ron Ron. Match 4-0. So it was left to Jonathon to bring the match home, which he did in true Evans style. His opponent had never actually seen top spin side curve drop drives before, and was totally befuddled. Jonathon slides home 3-0 and the Match to Northumbrialand 5-0.

John takes a tumble vs Lanks 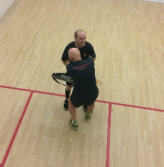 And Ronnie get his win! 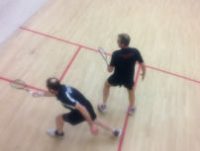 
A report by Bobby Backhand