GUTCH JUST TOO MUCH FOR LONG-TERM CHAMP 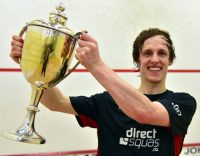 NORTHERN’S Liam Gutcher went into hyperdrive as he blitzed his way to winning his first ever Northumbria County Squash Championships. The 28-year-old was up against long-term nemesis and reigning champion Dave Barnett in the 2017 final at Tynemouth Squash Club. And he produced an effervescent display of speed, stamina and finesse to finally wrestle the title from Barnett’s grasp – winning 3-1 to end an epic 13-year reign. County No 1 Barnett, from Jesmond’s Northumberland Club, has bestrode the county scene like a colossus for many years now, and was playing in his 17th consecutive final. He had overcome Northern’s Cai Younger 3-1 in a pulsating semi-final the night before, coming from behind to book his final spot after an accidental clash between elbow and head had left Younger – who had played immaculate squash for a game and a half – looking like a boxer after a knockout punch. Barnett kept his focus despite his opponent finishing the match with a comedy head bandage straight out of The Mummy.

Gutcher, for his part, had looked ominous in defeating Tynemouth livewire Jamie Todd 3-0 in his semi. The rubber-legged home player produced some brilliant winners and showed off some of his typical eye-watering, retrieval – but the Northern man kept the pace and intensity so high, and his frenetic game was simply too strong on the day.

There was a packed crowd behind the glass back at Tynemouth for the showdown between the county’s top two players – Gutcher, preparing for his fourth final, knew he had been closing in on his rival bit by bit in recent years. But Barnett’s preparation is always superb for his favourite event, and if there is a more determined and focussed man on the North East squash scene, then he’s probably an assassin. Speaking of which, it was County No 1 Barnett who took first blood, winning the opener 11-8, bossing it in the front backhand corner with some tight winning drop shots. His trademark powerful lunges were allowing him to pounce early and volley quickly to counter-attack at front of court, and he was pinching some priceless points. The second was another close affair which went the way of the younger man 11-9 – Gutcher using more of the court now, and with errors at a premium, both players were working hard for every point. The whole crowd knew how important the third game was – and boy, did the players too. There were a few hotly-disputed decisions as the action continued unabated – Gutcher was distraught at being denied a let in the front left, but was delighted at being awarded a stroke in the middle of the court after being on the back end of a ferocious rally. By this stage, Barnett had established a 7-4 lead with some superb accurate winners, and would have been strong favourite on the Betfair in-play markets. But a very uncharacteristic serve out gave Gutcher hope – and the battle was well and truly back on. Two long rallies later, and it was all square at 7-7 – and from somewhere, Gutcher found the fuel to turn on the afterburners. The next six points were played at an incredible pace, and, though Barnett was still playing superb squash, he very quickly found himself squeezed out by the whirlwind at 11-9. The crowd were lapping up every second, and all the neutrals would have longed for this one to go all the way. It wasn’t to be though – Gutcher was will personified as he ground out a 10-3 lead in the fourth, and although Barnett threatened a late, late comeback with three cool winners in a row, in truth he was tiring a touch and Gutcher took it 11-6 with a drop shot to fulfil a lifelong ambition of being crowned County Champion. 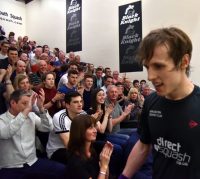 A punishing fitness regime had paid off for the Northern player – who blotted his copybook in only one area – sartorially – with the worst pair of washed out, greying shorts ever to grace a squash court. Let’s hope his promise of wearing his ‘lucky shorts’ for every match from now on was an idle threat. As for 35-year-old Barnett, by the time you read this, he has probably already started his training regime for revenge in 2018; and with a whole host of young bucks getting ready to push these two for the top prize, the competition at county level looks healthy for years to come. Full credit to both players for a thrilling climax to a wonderful week of squash at Tynemouth – superbly marshalled by Eric Mok and with regular media updates and brilliant photography of all the many category events from squash nut Steve Cubbins. 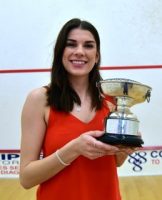 TYNEMOUTH’S Sam Ward found her range to see off a strong challenge from Hannah Cliff and become the queen of Northumbria squash on home turf. It was a formidable display from the 23-year-old, who had already won the County title three times previously, and who came into the 2017 tournament in peak fitness. Ward’s climactic match-up with club-mate Cliff had all the hallmarks of a classic before a ball was struck; her great reach and fast volleying style provides a sharp contrast to Cliff’s technical game – with a full array of boasts and lobs. It promised to be a showdown of high quality – and it certainly lived up to the hype. 2016 Champion Cliff – like her opponent – came into the match in great form, with an impressive run of results in recent months. She had seen off rising starlet Josie Barker of Northern in the semis 3-1, while Ward had looked strong in her 3-0 win over Barker’s team-mate, Karen Heron. 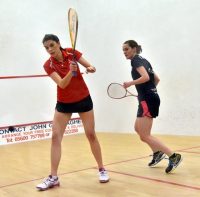 26-year-old Cliff was looking for her second county title, while Ward was looking to add to her crowns of 2011, 2012 and 2014. Ward it was who took the early advantage – looking a touch sharper around court, she was getting on to the ball early and thoroughly deserved her 11-8 win in the first. Cliff, though, hit her stride in the second, taking a decent early lead and holding on to it for 11-7, squaring up the match at 1-1. Ward was getting on top early in the rallies, but some clever counter-attacking from the reigning champ – particularly a backhand boast from deep which was dying in the front right corner – was turning defence into attack. At 1-1 and 9-6 up in the third, Cliff looked favourite – and who knows what might have been had a backhand cross court lob dipped just below, instead of just above the redline. That would have given her four game balls for a 2-1 lead – instead it gave Ward renewed hope. And she took her chance in fine style turning a three-point deficit into a 11-9 win in the third game, playing solid squash while her opponent made a couple of errors – missing the target by tiny margins as she went in for the kill. Cliff came back strongly in the fourth, and at 9-8 up, was so close to forcing a decider in what had been a close affair throughout. But Ward kept her nerve and played the long game, putting pressure on her opponent by volleying consistently and at pace, waiting for the kill-chance. She forced an error, then finished off the match with a forehand volley drop, for a hard-fought 3-1 win and the sweet smell of county title glory yet again.

Jesmond’s Max Forster is one to watch for the future, and he confirmed his promise with an impressive win in the A Plate, beating Chester-Le-Streets David Gardner. Concordia’s Simon Long had to be at his best to see off the irrepressible Tom Cornell (Northern) in the B event, while home favourite Nathan Dobson beat Tynemouth club-mate John Thompson in the C event final. Well done to the other category winners – Andrew Webber of Eldon Leisure (Men’s D), Peter McCleod of Sunderland (Men’s O45), Tynemouth’s Jon Evans (Men’s O55), Ashington’s Ronnie Freeman (Men’s O60), Gill Millington of Tynemouth (Women’s O45); Max Forster (Racketball) and the doubles champions – McCleod and Simon Cliff (Sunderland).