On Saturday 13th May, Tynemouth Squash Club once again hosted a sell-out Northumbria Squash Presentation Night. This followed an intensive week of team cup squash, and was rounded off in style by The Conduct Warnings.

Before the presentations, County Chairman Dave Barnett highlighted the stand-out successes of the 2016/17 season:

Dave thanked the members of the County Committee and others around the clubs for all their efforts over the season, and then presented the cup trophies and medals and league certificates, with announcements by League Secretary John Thompson.

Newcastle University, having broken Tynemouth’s grip on the Men’s Premier title in emphatic style last month, capped a highly successful season by capturing the Northumbria Cup to complete the double. In fact Premier runners-up Tynemouth had already been knocked out of the cup at the semi-final stage by Northumberland, who had won at 1, 2 and 3 to secure a final spot. Meanwhile in the other semi the University had the satisfaction of a win at last over Northern, the only team to beat them, twice, in the league! In the final, North East squash legend and University team coach Bryan Beeson got the University off to a flying start with a crisp 3-0 win at 3 against a considerably younger opponent in James Worsick, and despite Northumberland’s Dave Barnett and Player of the Premier Division Michael Andrews winning at 1 and 2 over Chris Wiggins and Michael Mackay respectively, the University’s lower order of Jack Hunter and Chris Garner secured a 3-2 overall victory in front of their rapturous supporters.

Tynemouth’s Ladies maintained their League and Cup dominance with Tynemouth Ladies 1B completing their own double, beating main rivals Tynemouth Ladies 1A to both the Ladies’ Premier title and the Ladies’ Northumbria Cup. After Northumberland Ladies 1 and Northern Ladies 1B had fallen at the semi-final stage, the final did not disappoint, with the Tynemouth 1B team eventually securing a 4-1 victory through a combination of the Rowell twins (Amy and Emma) at 4 and 5 and the Wards (Sam and mother Dawn) at 1 and 2, with the 1A team’s only victory coming at 3, Nicky Dobson overcoming Gill Millington. Both Amy and Sam had to come back from 2-1 down to win 3-2, Amy turning the tables on Fiona MacFarlane and Sam repeating her County Closed victory over Player of the Premier Division Hannah Cliff, who had won all their three previous League encounters this season.

The Ladies’ League Cup final was won by Northern Ladies 3, who also finished as runners-up in Division 1 to champions Primrose Ladies. Losing cup finalists Northumberland Ladies 2 had the consolation of winning the Division 2 title in their first season back in the league, with Hexham Ladies finishing Division 2 runners-up. Northumbria University Ladies finished a creditable fourth in Division 1 in their first season, and Primrose’s Sophie Cassidy picked up the Player of Division 1 award.

Predictably the top two Men’s Division 1 teams reached the League Cup A final, with Northumberland Juniors continuing their success story by winning their own league and cup double, and Northern 2 finishing runners-up in both competitions. Max Forster of Northumberland Juniors also picked up the Player of the Division award, helping his team to successive promotions from Division 2 to the Premier.

All the Newcastle University teams had a fantastic season, with University 2 narrowly missing out on promotion in Division 1, University 3 winning the Division 2 title as the only unbeaten side in the entire League, and University 4 not only finishing as Division 5 champions but also completing their own double by lifting League Cup B, having knocked out the top two Division 4 sides on the way to the final where they beat Hexham 2. The University’s Matthew Morton and George Swyer were the Players of Divisions 2 and 5 respectively and Charlotte Cooper picked up the Ladies’ Division 2 award. 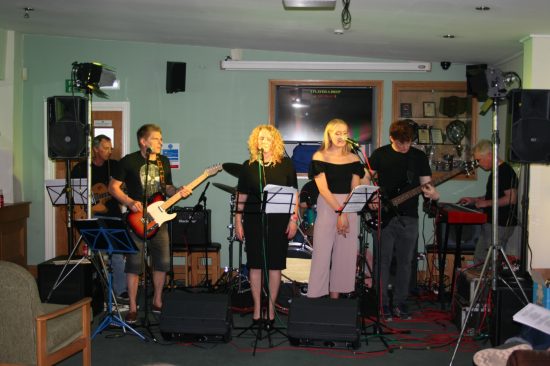 The Presentation Night was a big success with an excellent buffet, a bumper crowd from a variety of teams from all over the county (but mainly the Uni!) and great music from our very own squash band The Conduct Warnings, playing hits old and new from their increasing repertoire. They started the evening off with “I Gotta Feeling” followed by “I Played a Drop” and “No Let”, then introduced us to “Sudden Death (14-All) – Ode to Rob Brown”. Next up were classics “Don’t Stop (Team Squash)” and “Best of Three”, then Freddy Forehand’s newly-penned number “Hey Rude”. After the buffet break, we were straight into fans’ favourite “Is This The Way To Get To Primrose?” followed by Stones classics “(I Can’t Sort My) Racquet Action” and “This Could Be the Last Time (Team Captain Sick Mix)”, then Bobby Backhand’s version of the Elton John/Bernie Taupin hit “Wednesday Night’s Alright”, rounded off by “Stuck On The T Yet Again” and a singalong encore of “Hey Rude”.

A big thank-you to The Conduct Warnings (Glenn Ward, Nicky and Daisy Dobson, John and Andrew Walsh, Derek Collins and Greg Strettle plus sound-man Steve Drummond). Thanks also to Tynemouth Squash Club for hosting the event, and in particular to Alan Wall, Ray Rycroft, ‘Sir’ Tim and Ross Mazzucchi for their efforts and assistance throughout, and to the Dobsons for last-minute photography services! 2017 Presentation night photos