Fuller digs deep to make his mark on Gosforth Classic

Second seed Mark Fuller had to dig deep to clinch an epic 2017 Gosforth Classic title at Northern, in what was arguably the highest standard match ever staged at the club. The 2017 version of the Classic proved to be just that, with bumper crowds ignoring the considerable pull of the Manchester World Championships to watch and support a star-studded field. 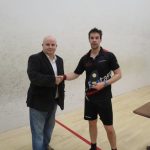 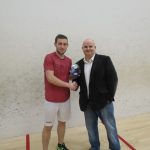 two best players – 32-year-old Fuller and top seed Joe Green, the losing finalist, both coming from the world’s top 150, and no fewer than 10 PSA-ranked professional players, this was the strongest line-up yet for the $1300 closed satellite event, an official professional tournament, and this year sponsored by Newcastle financial advice company Lowes Financial. At the start of a gripping final, Fuller went 1-0 then 2-1 down to Green, much the higher-ranked player at 114 who was bringing his trademark lung-busting athleticism to Court One. Green, who had not dropped a game on the way to the final, was just two days back in the UK after reaching the semi-finals of the $10K Florida Open, and he had achieved a career highlight after winning the Barbados Open last year. In short, he was a clear favourite, and started strongly taking the first game 11-9. However Fuller ground out the second will some patient squash, before Green ran away with the third following a disputed decision which left his older opponent seething. Fuller re-grouped though, and following some very tight squash in the fourth, keeping his left-handed opponent on the backhand for long periods, then choosing when to use a trademark disguised low cross court drop, he clinched it to force a decider. With supporters now returning to an already packed Northern after watching the world championships, it was almost time to hang off the rafters as Green and Fuller went toe-to-toe in a mammoth fifth. With both finally showing signs of tiredness, Green found reserves from somewhere; he upped the pace to win three points in a row from 4-8 down. However, he just clipped the top of the tin with an outlandish attacking boast at 7-8 down, following an exhausting and crucial rally, with his opponent looking stranded. That mistake gave Fuller a huge lift and, from 9-7 up, he hung on to lift the title.

There were epic clashes at all levels and all rounds, with B and C graded events being staged underneath the main tournament, and the best local lads taking on the pros in the A event. 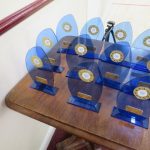 16-year-old Max Forster was undoubtedly the star performer from the North East contingent. He pulled off a shock 3-1 win over County Champion Liam Gutcher on the Friday night – then took his brand of fearless attacking squash in against world No 314 Phil Nightingale in the second round. The 35-year-old from Surrey won this event in 2014 in its previous guise of the Northern Cup – and few expected Forster to topple the 6ft 5in giant in this one. Nightingale was pitch perfect from 1-0 down, and seemed in control at 2-1 up. However, the match was about to take a significant turn, with the unfazed Forster going for the kill and producing an impressive array of attacking shots to leave his opponent twisting, turning, and flailing as the young maestro ran out a deserved 3-2 winner. Forster was the only Northumbria player to reach the quarter-finals in what was a breakthrough senior tournament for the former British Junior Open winner.

Tournament organiser Cai Younger beat Cumbria’s Keane Appleton 3-0 before losing his second round match to world No 336 Seigo Masuda. Younger’s Northern club-mate and tournament assistant Michael Mattimore also reached the second round, and impressed all the way in losing a tight 3-0 to No 4 seed and England U19 international Harry Falconer (WR 304). Former World No 27 and US Open finalist Paul Lord also reached the second round after beating Tynemouth’s evergreen Jon Evans in the first round. Lord, of Westoe, found the attacking range of 21-year-old Yorkshire man James Peach, the No 3 seed and world No 300, too much in the second round.

In the A Plate, Northern No 1 Liam Gutcher refocused after his first round loss in the main draw to go on and lift the title with some immaculate consistent squash. Newcastle University’s Michael McKay did nothing wrong in the final, but Gutcher’s high-paced game eventually forced the errors, and the home favourite ran out a 3-0 winner.

The home club also produced the B winner in 15-year-old Andrew Shipley, who was finding nicks and kills from everywhere in a one-sided final against close rival Harry Little (Northumberland Club). Little had the consolation of playing in one of the matches of the tournament in the semi-finals, an hour-long ‘clash of the titans’ in which he triumphed 3-2 over Sedgefield’s Dan Toas (11-13, 11-4, 10-12, 11-6, 14-12). When two young players are both gasping for air and playing for time, going point for point for nearly an hour, the spectators are left in no doubt that they have given everything!

Northern junior Matthew Thompson won a tight 3-0 to lift the B Plate, while in the C Event, Paul Bell took the honours with a gritty and hard-fought 3-1 victory over his former Newbiggin club mate John Armstrong.

In the C Event plate, the attacking range of Amy Rowell (Tynemouth) was a bit too much for Northern’s fast-improving junior Ewan Strathdee.

There were some other clashes throughout the graded events; Newbiggin’s Andy Black obviously timed his pre-tournament training to perfection. He had to dig deep to see of a strong challenge from Northern junior Kieran Mahoney in the C Event second round – 10-12, 11-6, 14-16, 11-6, 11-8.

Friday night’s nail-biter was a battle between two experienced players on the North East circuit – Ashington’s Ron Freeman and Chester-le-Street’s Paul Collinson. Freeman found himself 2-1 down with Collinson playing some excellent squash – but he fought back to sneak the last two 11-9, 11-9 after a few tight decisions from the marker and a competitive attitude all round. 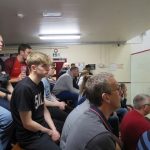 “It was great to see so many world-ranked professionals going head-to-head, and so many local players and supporters turning up,” said Younger. “This event is becoming firmly established on the North East squash calendar now, and the fans came from all over the region to create a great atmosphere, which the pros really appreciated. A lot of people – and I’m one of them – can’t wait until next year!” – Report by Dylan Younger