World no 57 Richie Fallows took an established pro squash tournament to another level in lifting the 2018 Lowes Financial Gosforth Classic. The London-born England international triumphed 3-2 in an engrossing final at Gosforth’s Northern Squash Club – wrenching the prized title from the tightfisted grip of reigning champion Mark Fuller. And the power, precision and intensity he brought to the showpiece game on Sunday December 16 gave the crowd an exciting glimpse of what modern squash looks and feels like the highest level of the worldwide game.

All weekend, fellow players and spectators had been treated to a pre-Christmas extravaganza of professional sport in this $2500 Professional Squash Association licensed event- supported for the second year by Newcastle-based Lowes Financial Management. Pro players from around the world and the UK mixed with the best of the North East in a talent-packed A Event; and the competition was so fierce that none of the region’s finest could force their way into the quarter-finals. 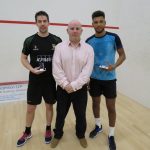 Fallows was the highest-ranked player ever to enter a Northern tournament which, in its third year under its current guise, has fast become a firm favourite on the UK squash calendar – with players and spectators alike. He certainly lived up to his top billing with a blistering array of attacking shots in the final’s opening game, fans – and opponent Fuller – were taken aback by the speed and power of his game. Fuller, though, won many friends through his patience, determination and sporting approach in winning the 2017 event – and they came back to support him in his hour of need. The 33-year-old – shouted on by a home crowd who loves an underdog, worked hard in every corner and took his rare chances with aplomb to clinch a topsy-turvy second round game 12-10. Fallows – a former British U23 champion – turned on the afterburners in the third, getting onto the ball early and dominating the T to clinch it 11-3 and re-establish his 2-1 lead. Surely, thought the crowd, the strong favourite would close it out now against a man 10 years older; Fuller, though, had other ideas. His quiet demeanour belies a fierce determination and he covered every inch of the court to nullify Fallows’ attacking threat. With Fallows’ focus perhaps fading a touch, Fuller found the nick a few times to bring home the fourth 11-4 and sent the Northern crowd into raptures. Both these players have high-level PSA titles under their belts and are thoroughly blooded in the pressure, cut and thrust of final deciders. But Fallows found his top level of pace and intensity to burn off his opponent in a blistering fifth, and emerge as a deserved winner of a superb event. “This is my first Gosforth Classic and I will definitely be back,” he told awards presenter Roger Tames as he collected his trophy and winners’ cheque. “The crowd has been fantastic and I hope to be back to defend this next year – I might even get a bit of support!”

Fuller, meanwhile, paid tribute to the raucous support and hospitality of the Northern crowd. “It’s been a while since I’ve beaten a top-50 player like Richie and at 33, I guess my chances might be running out,” he said. “The way he started I thought I might get blown away. But the crowd gave me a real lift and I like to think I put up a good fight to try and keep the trophy.”

Tournament director Cai Younger, who has built up the tournament year-on-year since 2016 to its current level, was understandably delighted by the success of the 2018 Gosforth Classic – a competition which took over from another PSA tournament, the Northern Cup. “The entire club has got behind this event, and that’s one of the reasons squash fans and players from round the country and beyond love coming here,” he said. “The standard and the atmosphere just keeps getting better – the challenge now is how can we improve on that?”

Once again, professionals and amateur players from around the UK and beyond descended on Gosforth for a pre-Christmas event which, with its traditional mid-tournament curry night – is almost as social as it is competitive. Canary Islands squash champion Aitor Chinea- also current President of the Canary Islands Squash Federation – and his countryman Javier Gonzalves – flew in from Tenerife just for the tournament; and Chinea took time out afterwards to catch up in the city with his old school friend, Newcastle United’s Ayoze Perez.

And further international flavour was provided by 28-year-old Canadian Jeff Klotz, who has been playing in Northern colours during a term of medical study in Newcastle.

While another Newcastle player made up for first-round disappointment by lifting the A Plate trophy.

17-year-old Northumberland Champion Max Forster saw off fellow Geordie Jamie Todd in the first round – helped by his opponent having to retire early after suffering a bizarre injury when a bead from his bracelet forced his way into the palm of his hand as he dived on the floor to retrieve a shot.

Forster was supposed to lose 3-0 in the second round to No 1 seed Richie Fallows; but the Northumberland Club player hadn’t read the script. He sneaked the opener, roared on by a partisan home crowd, and made a fist of it in the others as he went out 3-1 to an established top-50 standard player who cannot fail to have been impressed by his resilience and character.

Tournament organiser and current Northern club champion Cai Younger saw off Durham County Championship runner-up Ben Cross in his first round – a gritty 3-1 win against a players whose retrieval and tenacity has to be seen to be believed.

And never mind his socks, Younger worked his skin off to clinch an epic second game – 16-14 – against reigning champion Mark Fuller in their second round clash. Fuller re-established his lead with some accurate squash, but Younger – playing on his favoured No 1 court at his home club – hit nicks a-go-go in the fourth to establish an early lead, including a forehand crash nick which rolled out so flat it nearly went underground. Younger held on to 8-8 before hitting the proverbial wall, and Fuller showed his trademark patience to close out 11-8 and emerge a 3-1 winner.

Northern’s whirling dervish Michael Mattimore – back in the region from Birmingham University for the Christmas break – hit top form with an impressive 3-0 win over fast-improving 17-year-old clubmate Andrew Shipley in the first round.

Renowned for his attacking shots and speed around the court, Mattimore was tipped to have half a chance against Charlie Cowie from Manchester in the last 16. However he found the world No 270 in imperious form, and Cowie barely misplaced a shot on his way to a 3-0 win.

Newcastle University squash coach Liam Gutcher lost a 3-2 thriller to Scotsman Martin Ross in what was the pick of the first round clashes. Gutcher – a firm favourite at Northern where he has won the club championships three times – probably deserved better after an impressive and energetic display.

However, just like the year before, Gutcher dusted himself down and set about winning the plate; he claimed impressive scalps in Michael McKay (Newcastle Uni – last year’s Plate finalist) and Northern club-mate Andrew Shipley on this way to the final.

That match was a North of England squash version of the UEFA Supercup – a clash between Gutcher, a former Northumberland County champion, and Tom Bamford (Ex-Yorkshire County Champion). Bamford boasts a deceptive laid-back demeanour on court, and a full array of flair shots. However, Gutcher’s accuracy, determination and speed around court were too much for his opponent on the day as he ran out a deserved 3-0 winner.

Capital show from DC in the B

The B Event read like a who’s who of North East squash, and if there has been a stronger undercard tournament in the region then this correspondent cannot recall it. Collins was one of five or six players who, pretournament, looked a likely winner. But he was certainly not the favourite.

That tag went to 55-year-old Steve Calvert – a veteran of the Northumberland and Durham Premier Leagues and currently in serious training for the British Masters.

Northern hotshot Tom Cornell provided possibly the upset of the tournament by knocking out Calvert at the quarter-final stage, coming from behind to win 3-2 with an epic display of energetic and determined squash.

Cornell gave Collins a game of it in the semi-final – coming from 2-0 down to take the third but his fellow teenager was in clinical form and found his range to see out a 3-1 victory.

Collins himself had provided a cocktail of determination and flair in seeing off No 2 seed Aitor Chinea in the quarters. The Tenerife player – a former Canary Islands Champion who had flown in just for the event – levelled at 2-2 with a comfortable win in the fourth, only to watch as the North East player hit a range of attacking winners in the decider.

The final itself was a similar nip-and-tuck affair, and a real contrast of styles. Canadian Klotz bosses the T like a cruiserweight, and he reads the game well, pushing the ball hard and deep and waiting for his chance. Collins, meanwhile, was pouncing on every half-chance, and going for the kill. Those attacking instincts again paid off as he established a pivotal lead in the decider, his smooth racket-work proving – just – too accurate and clinical for the Northern player as he took it 11-9. That was the 24th nail-biter of the tournament which had gone to the full five games, showing what a treat the fans were served up across the weekend.

Newcastle University sharp-shooter Eve Driver also has an impressive array of racket skills – and she showed her full attacking range to win the B Plate final 3-0 against the hard-hitting Andy Purdy of Primrose.

In the C Event final, another Newcastle University player – James Lees – was too consistent for Northern’s dynamo Joel Birch-Machin (3-0), while in the Plate, it was an all-Northern affair as Stuart Mitchell saw off young club-mate Adam Forster by the same scoreline.


As well as showpiece sponsors Lowes Financial, the 2018 Gosforth Classic was also supported by a list of sponsors without whom this tournament would not have gone ahead. Thanks go to Quality Solicitors Lawson & Thompson, Northern Squash Club, Northumberland County Squash, CWS Double Glazing Repairs, Sport Newcastle and Turnitin.

But, perhaps above all, thanks go to those people at Northern who gave up their time and helped in a variety of ways to make the tournament a roaring success – Julie Cornell and Denise Thompson (who both did a sterling job in manning the tournament desk), Clive Lucas, Dave North, Richard Vitty, club chairman Allan Curry and, last but not least, assistant tournament director Michael Mattimore. And sincere apologies to anyone who’s name has not been mentioned!

Here are some photos of the event to share.