The Cup results – with a further win for Tynemouth 2 in the League Cup A final – rounded off a superb season for the club when they played host to the end-of-season cup finals and Presentation Night on May 11.

For the men’s first team, it was a double-double – reinforcing the message from 2018 that Tynemouth are the most dominant force in the county when it comes to team squash. The men’s Northumbria Premier League title went right down to the wire, leaders Tynemouth hosting their big rivals, second-placed Northern in their final game. A big win for the visitors would have seen the title go to Gosforth – and they put up a strong fight. But Tynemouth, led by No 1 and 12-times County Champion Dave Barnett, had quality right throughout the order, in Jamie Todd, Jon Evans, Nick Hale and Hannah Cliff. They emerged triumphant 4-1 on the night to retain the league title by 29 points.

Northern finished second, with the other two Northumbria Cup places going to third-placed Newcastle University A and Northumberland Club. But if the unpredictability of the cup gave their rivals further hope – right to the end – it was ultimately extinguished as Tynemouth finished top dogs yet again. They saw off Northumberland Club 4-1 in a Friday night semi-final, and once again it was Northern up next in the final, after they secured their place by beating third-placed Newcastle University in their last-four clash.

Tynemouth got off to a flier with a 3-0 win in the first rubber – Richard Parsons hitting top form to see off Northern’s No 3 Sam Ward. Northern No 1 Cai Younger then gave the visitors hope with a hard-fought win over Dave Barnett – reversing the result of their title decider three weeks earlier. And Northern hopes were raised when second string Andrew Shipley came away as a winner in a thrilling shootout with Jamie Todd, by the same 3-1 scoreline. With home No 5 Hannah Cliff battling back defiantly from 9-5 down in the decider to take that match 12-10 in the fifth, it was all down to the No 4’s – where Jon Evans put in a lung-busting performance to keep the Cup in Tynemouth hands after a closely fought 3-1 win over Graham Johnson – saving two game balls in the fourth. 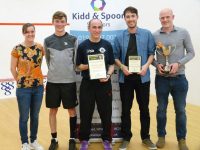 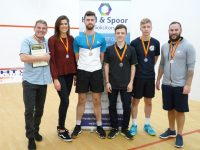 Tynemouth continued their success story at second team level – repeating their League Cup A win of 2018 with a 4-1 win over Sunderland 1. The highlight was first string Matty Walsh’s recovery from 2-0 down against Peter McCleod to win 3-2 and secure the match for the home side. The League Cup B final between Eldon 2 and giant-killers Primrose 3 was settled early in Primrose’s favour by their lower order, before Eldon came back at 1st and 2nd strings to make the final score 3-2 to Primrose. 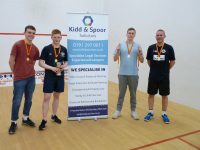 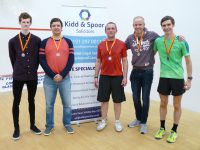 Ladies:
Tynemouth beat the reigning Cup holders Northumbria University 3-2 in a topsy-turvy semi-final on the Friday night – while Northern 1B claimed a walkover with clubmates 1A unable to produce a team on the night. In the final, it was one-way traffic as the home side carved open an early lead and never let it slip. Amy Rowell (3-0 over Karen Heron), Dawn Ward (3-1 over Lesley Vitty), Fiona MaFarlance (3-0, Erin Vitty), Emma Rowell (3-0, Emma Delgaty) and Gill Millington (3-1, Aanya Hamilton), made it a clean sweep of individual wins on the night to round off an excellent season. 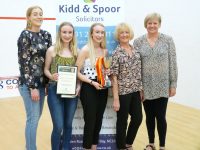 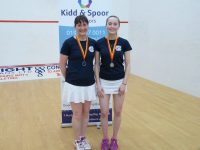 The Ladies League Cup final (for first and second division teams) produced a real nail-biter with Northumberland Ladies, despite having only four players, beat Northern Ladies 3 by the narrowest of margins, 3-2. The final came down to the third string result in which Northumberland’s Beth Dean recovered from 2-0 down to edge out Sophie Bedford 3-2 in an epic which went right to the wire. 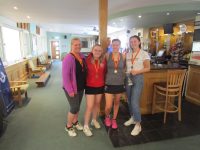 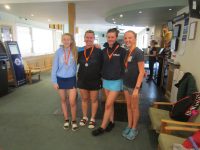 Congratulations to all the teams involved, who played in the right spirit and gave the spectators some thrilling entertainment throughout the day.