ON a blistering May weekend, Northern players cranked up the heat on court in the inaugural Mantis Newcastle Northern Cup. 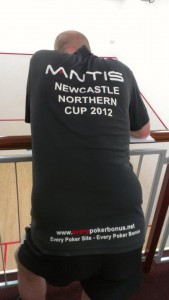 The professional PSA-graded ‘A’ event – organised by our own Liam Gutcher – was a huge success and brought most of the best players in the North East – and a few of the best young pros in the country – to Gosforth, in the hunt for ranking points and their share of a healthy $1000 prize fund.

Below that there were fiercely-competitive games in the ‘B’ competition – with Premier League regulars at the top of the seedings – and ‘C’ event.

Gutcher’s progress continued apace with a 3-0 win over Dave Jackson (11-1, 11-2, 11-3), while Westoe’s former professional Paul Lord lost three nail-bitingly close games to reigning British Under 19 Champion Tom Ford of Gloucester. Even a mid-match change of shoes could not quite swing it for Lord, who was edged out 11-7, 13-11, 11-9, despite playing some superb stuff.

Ford prevailed in another epic tussle in the semis, beating close friend Hockborn 3-1 after over an hour on court. Ford lost the first 14-12 before hitting back 11-9, 11-2, 15-13 for an impressive 3-1 win in a match which had everything – blistering speed, stamina, great shots and incredible retrieval.

In the other semi, Gutcher, who had led the first game almost throughout, lost a very close first encounter 11-9 to No 2 seed Chris Tasker-Grindley, from Edgbaston Priory Club, Birmingham. The visitor though, then went on to find his volleying range, taking the ball early and disrupting the home favourite’s rhythm to take both the next two games 11-4. 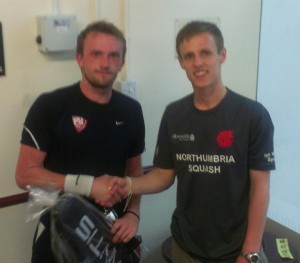 Tasker-Grindley is a former England No 1 at U15, U17 and U19 level – and the 24-year-old showed all his class and experience to see off a determined challenge from Ford in the final, which ended 3-2.

The first game went to the in-form Ford – just 18 years old and a recent finalist at the European U19 Junior Championships. But the younger man lost his rhythm in the second, going down 11-2 to leave the scores at 1-1. Ford clinched an epic third game 11-9 but Tasker-Grindley kept his focus to level at 2-2 before going on to build what seemed an unassailable lead at 10-4 up – with six match balls now in his favour.

Ford, though, geed up by the crowd of die-hard squash fans outside court one who had eschewed the glorious Sunday afternoon sunshine, threatened an unlikely comeback with four hard-won points before eventually going down 11-8 – ending a great display of strokeplay, fitness and determination from two top young players which I’m sure will inspire Northern’s membership on to emulate them!

Tasker-Grindley walked off with the £100 first prize and 20 precious PSA ranking points – with £80 and 14 points for the valiant runner-up.

The A plate final ended sadly for Jesmond’s Phil Thomas, who had to withdraw injured and head for hospital with a suspected snapped calf muscle during the first game of his match with Chris Glinton – we wish him well with his recovery.

Northern starlet Cai Younger made some waves in the B event. Hot on the heels of his A Plate victory in the club championships the week before, Younger started his campaign with a 3-0 win over Jim Douglas (11-5, 14-12, 11-5).

The 15-year-old then caused something of a shock by prevailing in a titanic five-setter against the No 2 seed, Northern’s hard-hitting first-team regular Marcus Campbell – Younger working hard to live with some stunning attacking shots from his opponent, who was edged out 11-8 in the fifth (3-11, 11-9, 11-6, 8-11, 11-8).

A first-ever match against another of his long-term coaches, Richard Vitty, was next – Vitty produced some excellent unpredictable squash, especially in the second game, but could not contain Younger, whose movement and low straight drives helped him book his place in the final with a 3-0 win (11-6, 12-10, 11-4). 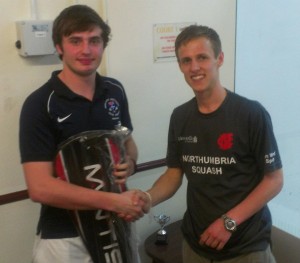 That final against No 1 seed Jonny Honeyman proved a bridge too far for the junior, who went down 3-1 – the first and the fourth games going right to the wire but both clinched by the more experienced Newcastle University No 2 to swing the match – and a new Mantis squash racket – his way.

Northern’s Sarah Dowson produced a superb performance to see off the stylish Elliott Carr 3-0 (12-10, 11-8, 11-3) in the B event first round, before going down to eventual winner Honeyman.

In the B Plate, Ray Storey showed his fighting spirit – and produced some great winners – to come from 2-0 down against Northumbria University player Jordan Hasmi (a 3-0 winner over Carr earlier in the plate) to take the title 3-2.

The C tournament final went to the in-form Sam Broughton, to make it two titles in two weeks after his C event triumph in the Northern Club Championships the week before. 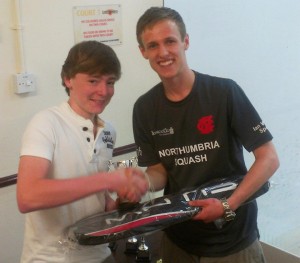 Wake, only recently back in action after a lengthy spell out with glandular fever, tried all he could in a hard-fought final, but Broughton refused to budge an inch and worked his way to a well-deserved 3-0 win.

Other notable C event wins came for Clive Lucas (3-1 over Tom White – another young junior whose display suggests he is one to watch) and Birch-Machin (3-1 over Dylan Younger), while special mention must go to Gordie Robertson who had to concede at match-ball up to Birch-Machin after a sudden onset of dementia (OK, not really – it was a bad leg . . . or back. Or was it leg and back?).

In the C event plate David Home kept a level head and produced excellent squash to beat favourite Dave North in the quarter-final. North and Home shared the first two games, with only a two-point winning margin in each. Home then established a 2-1 lead, some superb strokeplay giving him an11-6 win.

But North is a fit player and a determined character and was not finished yet – he clinched the fourth 16-14 to set up a decider. With both players giving their all (nice seeing a senior AND a junior playing for time after a long rally!) Home finally pulled away to take the fifth 11-7.

Home proved too much for a fast-improving Jack Cornell in the semis, winning 3-1 to book his place in the final against Dylan Younger.

Great to see two of the club’s promising youngsters contesting this one (ahem!). Younger – who had beaten Tom White 3-0 in his semi – went two games down as Home – yet another of the emerging starlets from Richard Vitty’s famous junior programme – found his range with some tight drives and volley kills. 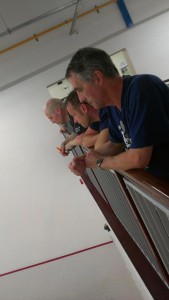 But Younger’s determined running and the occasional crafty drop made the third a real contest and the (slightly) older competitor prevailed 13-11 to keep his hopes alive. The fourth also went to Younger (who deliberately distracted his opponent at one stage, making him laugh with the world’s worst serve). And with both players fighting for every point in a hard-fought fifth game, a few errors at key times from Home allowed Younger to take the game 11-7 and the match 3-2.

Special thanks must go to Liam Gutcher for organising a great weekend of squash, stopping us from lazing around in the glorious late May sunshine and doing his bit to prevent the spread of skin cancer in North Gosforth. Thanks also to his competition sponsors Mantis (who provided squash rackets for all main event winners and racketball rackets for the runners-up), Newcastle City Council, Northumbria Squash, Northern Junior Squash, Ian Wood Sports and Every Poker Bonus.

The tournament will be back in February, when Gutcher is sure to have less competition from the weather and another bumper entry is assured.