This seasons Junior County Closed again took place at The Northumberland Club over the weekend 29th/30th of September. The entries were up on last year with over 100 entries into the 11 events played over the weekend.

The youngest age group was the mixed under 9 event played in a 2 hour spel on the Sunday afternoon. 11 competitors played in two round robin groups with Dan Neill and Tom Walsh topping the groups and competing in the final. Neill won the final 2-0 and regained the title he won last year.

The u11 girls event was a 4 player round robin. Aanya Hamilton was top seed and met her toughest opponent in her third and last match against Lucy Anderson. They had both won 3-0 in their previous matches but it was to be Hamilton who took the win with a close 3-1 victory.

The boys under 11 event was a full 16 draw headed by englands number 2 ranked under 11 Max Forster. Max was a big favourite and wasn’t threatened throughout beating club mate Harry Little in the final, little had come through to beat 2 seed Andrew Shipley in a close semi final match.

The U13 girls event had 9 entrants and played out 3 groups of 3 on the Saturday to qualify for 3 further groups on the Sunday. The top 3 girls on the Sunday were Laura Neill from the Northumberland Club and the Rowell twins, Amy and Emma from Primrose. The sisters had their usual very close battle with Emma winning through this time 3-1, Neill also beat Amy and set up the decider between Emma and Laura. Neill proved to strong winning 3-1 and taking the second title back to the Neill household.

The Boys u13 very much went to seeding with the top 4 making it to the smi-final. Top seed Joe Wareing and second seed Max Forster comfortably won thei semi-finals to set the expected final. Wareing was always on top throughout the high quality final and despite Forster fighting hard to try and get his second title of the weekend Wareing took it 3-0. 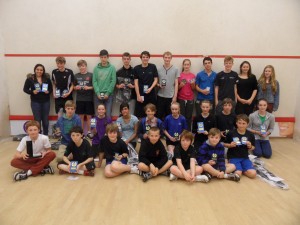 The girls u15 was the closest fought girls event over the weekend with the top 4 players split by the smallest margins. The top 2 seeds Laura Neill and Josie Barker were beaten in the semi-finals by Georgia Webster and Tegan Younger respectively. Webster and Younger had met eachother in the first round of the u17 event earlier in the weekend and it was a close 3-2 but the final proved to be one-sided with Webster taking it 3-0.

The boys u15 event proved to be a comfortable cruise for Jamie Todd. Todd is currently ranked at 2 in England and was far to strong for others in the draw despite the efforts of a fast improving Sam Broughton in the final.

The Girls u17 and u19 events had repeat finals with the counties top 2 girls players Lucy Beecroft and Maria Bainbridge playing eachother twice. Beecroft currently tops the England rankings at u17 level and was too strong in both finals against Bainbridge winning both titles with 3-0 wins.

The boys u17 event had the biggest entry with 19 and it was to be a hard fought event with some tough matches throughout. Chris Wiggins was top seed and the u15 champion Jamie Todd second seed, they both made it to the final. Wiggins had a tough match with club mate Dan Wareing in the semi-final and Todd came through a battle with his fellow Tynemouth junior Andrew Walsh. The final was of a very high standard with long tough rallies but Todds extra speed and retrieving abilities got to his opponent who tired ,Todd won 3-0 making it a double double winning the u15 and u17 events for the second year in a row.

The u19 boys was a small 4 player entry with Cai Younger winning all of his matches to take the title, it wasn’t easy though he scraped through a great match against Hexhams Simon Graham, Younger took the match 11-9 in the fifth leaving Graham to take the runner-up slot.