The John Dale trophy was awarded for the 3rd year at the Junior County Closed presentation on September 30th. John Dale died in January 2010, he was a great player and represented himself and Northumbria Squash admirably in his illustrious junior and senior squash career that was halted by cancer at a young age. The Trophy in his name is presented yearly to the ‘best performing junior’ taking into account both achievements and general attitude over the squash playing season. 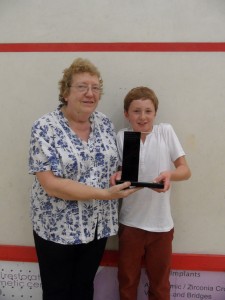 Johns Mam Linda presented the trophy this season to Northerns Michael Mattimore. Michael has had  a great season, starting with winning the county closed u13 last September his season went from strength to strength winning silver events in Abbeydale and Nottingham and reaching the final of the English Closed in Surrey in March. These results earned Michael a number 2 ranking in England and selection to represent England at home internationals where he won all of his matches against France, Wales and Ireland.

Michaels achievements were down to his great squash ability but also a huge improvement in his temperament on court, he used to be easily upset but has worked on staying calm and keeping his focus and the results followed, CONGRATULATIONS!