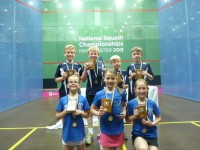 [/dropcap]June saw the inaugural U11 Inter Counties Festival held at the National Squash Centre, Manchester.  Twelve boys’ teams and six girls’ teams from around England attended the event, and Northumbria was one of the five counties fielding both boys’ and girls’ teams.

Despite many of our players not having been to the Centre before, none were overawed, and all showed fantastic team spirit, supporting their fellow team mates in all the ties.

The boys team (Ali Little, Tom Walsh, Matthew Dyter, Harry Morris) came up against some of the best players in the country at this age group, but managed to win three of their five group matches, finishing third in their group. They went on to the fifth/sixth place playoff, where unfortunately, with the tie drawn at 1 match each, they had to concede the final match and therefore the tie due to illness of the second string player.

Both teams performed extremely well and showed great fighting spirit and maturity in their squash, a great outcome for Northumbria.