For the first time ever the Mens Over 55s reached the National Inter County Finals, held at Stourbridge over the weekend of 22/23 March 2014. Following our top-placed finish in the Premier Division Stage 1 last October, we faced Northants in the semi final followed by either Surrey or holders Middlesex in the final. 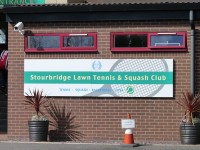 The Northumbria squad was strengthened by the introduction of baby-faced assassin Jon Evans at no. 1, but weakened by Derek Collins’ withdrawal following diagnosis of a “mini-stroke” on his return from vacation a few days before the event (we thought it was a harsh decision and should have been no more than a mini-let). We wish Derek all the best for a speedy recovery.

In Saturday’s semi final against fellow first-timers Northants, we quickly cruised to a 5-0 victory with only one game dropped in the entire match. Ron was particularly pleased to win as he had discovered quite by chance halfway through the journey down in the car that it was his 58th birthday, when he received a reminder on his phone. Now it became clear to him why his wife had wanted him to open that package at the foot of the bed before leaving in the morning…

Meanwhile Middlesex dispatched Surrey also 5-0, but generally had longer and tougher games, giving some of our squad the belief they had the upper hand on the fitness front (we know who they were).

The Sunday final against Middlesex started promisingly with both Colin and Andrew winning their first games, only to both go down 3-1 to strong opponents. Maybe the manner of Andrew’s defeat had something to do with his whisky tasting session at the “equinox party” he had attended the night before with his wife – we shall never know. John levelled his match at 1-1 but also eventually went down 3-1, just as Jon was completing a satisfying 3-0 victory over former national Over 55 champion Mark Cowley, notable for the award of a conduct stroke against Jon when his wily opponent managed to convince the referee that Jon was the bad guy (we all thought it was the other way round, but maybe we were wrong). The Middlesex no.2 Duleep Adhihetty completed proceedings with a tight 3-0 win over Ron on an increasingly dead court with absolutely no remaining sign of life from the heating system, or Ron. So the final score was 4-1 to Middlesex, who retained the trophy for the 5th consecutive year.

So we just failed at the final hurdle, but it was a great effort by all involved, including both Derek and Alan who played a big part in getting us there. Congratulations to the whole squad for a brilliant first season in the Premier Division, and we look forward to giving it another go amongst the elite counties next season. 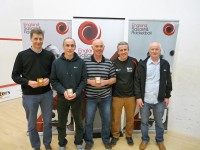