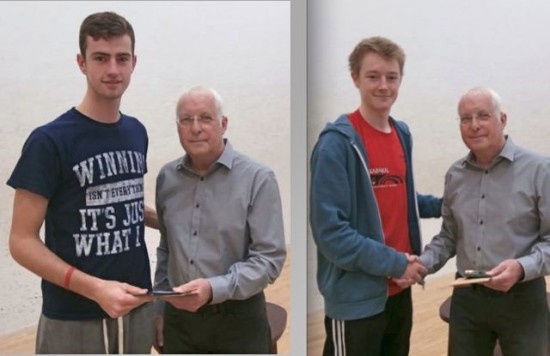 USUAL suspects and A Plate finalists Cai Younger and Alex Robertson led the Geordie charge on finals day of the 2014 Northern Cup . . .

While gunslinger Andy Purdy picked off all-comers before riding out of town with the B Event trophy.

There were strong and full 16-player draws in all events in the $1000 dollar professional tournament – a competition sponsored by Northumbria University Sport’s Foundation, and organised by Northern No 1, and world No 258 Liam Gutcher.

Precious world ranking points were up for grabs for the travelling pros, with the region’s top talent also proving able and willing competition.

Former World No 27 Paul Lord and multiple county champion Dave Barnett were both in impressive form, and did the county proud by reaching the semi-finals of the A event.

Paul Lorded it over Cai Younger and Liam Gutcher in the early rounds; the latter an impressive 3-1 win, coming back from 10-6 down in the fourth with some immaculate and deceptive winners.

Barnett proved too strong for juniors Alex Robertson and Connor Sheen and played some great stuff, including some inch-perfect backhand drops, before being edged out 3-1 by Hertfordshire’s athletic Nick Mulvey in a superb semi-final.

Lord was outgunned by Phil Nightingale in his semi – and in the final, the Sussex 31-year-old saved two match balls at 2-1 down to come back and grind out a 3-2 win against the higher ranked Mulvey.

There were some superb shots and rallies in this encounter, and the retrieval of both players was top-drawer, but the action was stop-start and progress frustratingly slow at times.

As a spectacle, maybe the most free-flowing match on finals day was the 5-set thriller between messrs Younger and Robertson, which to-ed and fro-ed until the former triumphed 11-8 in the fifth.

Both were close to their best at times, with Younger’s sweeping power game contrasting with Robertson’s varied attacking touch.

Pals and Northern team-mates, the duo played full-blooded fast-paced and free-flowing squash, but in a great spirit, with a smile on their faces and sporting to the end.

Nobody plays with a bigger smile than Chester-le-Street’s Purdy, who produced some super stuff to live up to his No 1 seeding in the B Event; although he should arguably have been banned for using a magic wand instead of a squash racket, so tight were his drops and so fast and deep his drives.

Purdy saw off Matty Cooper, the hard-running James O’Neill, then came through a 5-set humdinger with Jack Cornell, elder of the famed Corndog brothers.

This semi-final was pure theatre – it had fine shots, contested decisions, flair, mishaps, mishits (conduct warnings issued for this . . . and duly ignored) and raw emotion on both sides; the match had everything except a streaker (don’t get any ideas, boys). It certainly wasn’t easy like Sunday morning.

Purdy was tested again in the final, but shot-wise had just a shade too much on the day for the superfit Tiezheng Yuan (Newcastle University), who finished runner-up in a strong B event.

The B Plate final saw Tynemouth’s tricky Brown just edged out by Westoe’s Robson in the Steve derby; the pair had seen off Matty Cooper and Simon Ho respectively in two hard-fought semi-finals earlier that day.

Anyone who knows their squash will tell you that the real action is in the C Event – and so it proved again, with Northern’s Cameron Hamilton edged out in a 3-2 final thriller on his home turf.

In the earlier rounds, Cambelt’s powerful driveshaft game and swift movement proved too much for Newbiggin’s Chris Pringle (3-1), and Northern clubmate Tegan Younger (a closely contested 3-1).

However, Peter ‘The Wizard’ Windram proved just too cunning in the C final, seeing off Hamilton 3-2 (11-8 the score in the final game) in front of a packed crowd on Court 1. The Norton stroke-maker had beaten Steve Drummond, Wayne Hollywood and No 1 seed Glover Gamero on his way to the final.

In the C Plate final, Newbiggin’s hard-hitting Pringle left Northern’s Dylan Younger feeling sour (cream and onion) with a 3-0 final win. Pringle had proved too crisp for Alnwick’s Alan Morgan in the semi, winning 12-10 in the fifth, while Younger had clinched his semi-final against club-mate Tony Broughton 11-9 in what felt like the 55th.

Other competitors who deserve a special mention in the “Getting Your Money’s Worth” Category were:

– Northern’s Chris Hull and Richard Vitty who slugged out a humdinger before the latter edged home 11-9 in the fifth . .

– Alex Robertson and Dave Jackson, who kept squash fans away from the bar on a Saturday night for an age until Robertson edged a thriller 11-8 for a 3-2 win from 2-0 down . .

– Hamilton and the fast-improving Corndog Jnr, Tom Cornell, for a rousing five-setter semi in the C Event (settled 11-8 in the fifth in Ham’s favour after TC had set the early pace).

Overall, tournament chief and chief flip-flop wearer Gutcher was delighted with the standard of competition, and the crowds, over the 3-day event.

“It’s been a lot of work, but well worth it. I think everyone’s enjoyed playing, and watching some top-class squash,” he purred.

“Also thanks to Paul Lord for some great T-shirts, to Soled Out in Whitley Bay for the flash trophies and Northern Football Club for being good hosts.”