TYNEMOUTH’s Lucy Beecroft and Jesmond’s Dan Wareing took top honours at the Northumbria County Squash Championshps – but it was the Girls U17 final which produced the most thrilling final on a day of high drama.

England international Beecroft was in inspired form to see off home player Charlotte Cooper in the Girls U19 showpiece – using a full array of attacking kill-shots on her way to a 11-2,11-4, 11-2 triumph.

And the boys’ final was another cracker, with both players covering every inch of the court.

Wareing took a hard-fought 1-0 lead, but Tynemouth’s Andrew Walsh found his range to go 8-4 up in the second, before tinning a forehand volley drop which would have put him in prime position to level things.

His opponent, though, took advantage, staying ice-cool under pressure to stretch out a 2-0 lead, winning the second 11-8 before powering home by the same scoreline in the third – a game enlivened by some superb winners from both players.

Tightest finish of the day was on Court 2, where the fast-improving Jose Barker looked home and hosed after dominating to take a 2-0 lead in the final of the Girls U17s.

But friend and long-time nemesis Georgia Webster simply doesn’t know when she’s beaten – she clawed it back to 2-2 with some strong hitting and stronger running.

Still Northern starlet Barker looked the likely winner – maintaining a one or two-point lead all the way to 9-7 after some superb rallies. Just two points from victory, and Ladbrokes had closed the book – but Tynemouth’s Webster had other ideas.

Chasing down all of Barker’s immaculate volley kills, she waited for her chances and took them, winning the five points in a row she needed, and closing out with a long-range backhand drop to take the title 11-9 after an enthralling match which showed both players at their best.

A tight affair this, with former England international Mattimore edging home 11-9, 11-7, 11-7 for a deserved victory and another tournament win for the growing collection.

Dan’s younger brother Joe Wareing made it two junior county champions in one household, winning the Boys U15 title ahead of Jesmond clubmate Max Forster – and taking the unofficial title of Best Haircut of the Day.

The imperious Laura Neill was too strong in the Girls U15s section – ahead of the ever-improving Rowell twins of Tynemouth, Amy and Emma, who finished a strong second and third respectively.

The Boys U13 tournament is always hotly contested, and 2014 was no exception – Mad Max Forster coming out on top on home Jesmond turf with a 3-0 win over Northern’s attacking starlet Andrew Shipley.

With Harry Little third and Tynemouth’s Nathan Dobson fourth, the future of Northumbria junior squash looks in safe hands for a good while yet.

Speaking of future starlets, another to look out for is Northern’s Megan Evans. The dark-haired dynamo plays powerful, mature squash for her age and took out the top two seeds on her way to the U13 title.

The Boys U11 title went to the hard-hitting Dan Neill – another young player who keeps find his best form at junior tournaments; but he had to fight all the way before clinching the title by just two points. Sam Aiston was an unlucky runner-up after losing the showpiece match 3-2 (8-11, 3-11, 11-7, 11-4, 9-11). 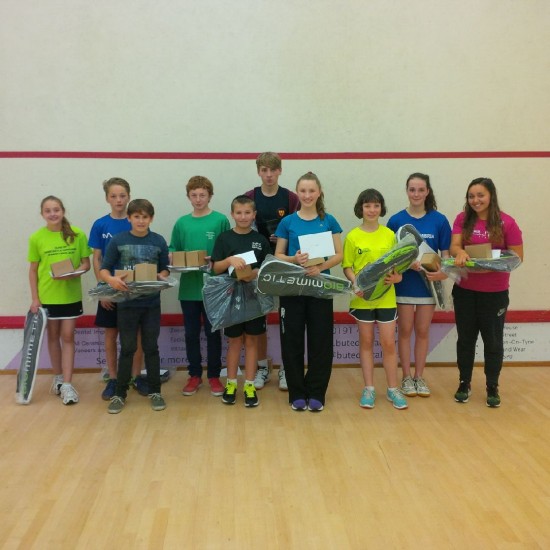