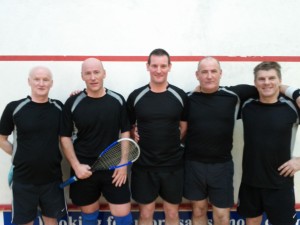 We think that Alan’s twin brother Alan had sneaked in as it was a totally different Alan Coates playing here. He quickly got into his stride, playing at a high tempo mixed up with  great drops, running out a 3-0 victory.  Ken then went on and didn’t play as well as he did in the 1st match and lost 3-0 vs a clever opponent. Well he said he had some  ‘O’ levels anyway.   Glenn then went on and raced into a 2-0, 7-2 up in the 3rd lead….. and proceeded to lose 3-2.  Ah yes No Lungs Ward.  Tony then stepped on court and soon notched up his 2nd win of his O-45 career with a 3-1 win over a good opponent. Not as good as Tony will tell you he was, but canny good.  Not even a small blip in the 2nd game which he lost 10-8 could stop the Bisset jugganaut rolling on. And it was a big jugganaut.  And so with once again the match poised at 2-2, it was left to The Gary Candlish to win it for us. And he did it in style again, with a 3-0 win which took hIs county O-45 career record to P4, W4, L0. And boy did we hear that quite a bit over the next 24 hours. Another win 3-2 for Geordies. Oh dear  we  might get promoted. Then it’ll be too hard.

This will be the 3rd season in recent times the Mens O45 will compete, after a promotion 2 seasons ago they remained in division 1 last season. They play their matches over the weekends of 27th/28th of November and 29th/30th of January.